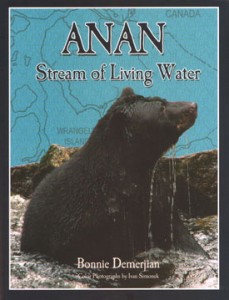 Anan Creek is internationally known as one of the most productive Pink salmon streams in North America, making it by default a unmatched location for viewing both Black and Brown bears. Anan Creek is located on the north shore of the Cleveland Peninsula, just south of Wrangell Island and north of Ketchikan. Wrangell resident Bonnie Demerjian has authored Anan: Stream of Living Water, an exhaustive chronicle of the stream and its denizens. The account displays Bonnie’s depth of local knowledge and understanding of the complex relationships that exist between human visitors, feeding bears and spawning salmon meeting together at the creek.

Demerjian paints a descriptive view of the region’s natural history and geology. Using photographs taken by Ivan Simonek, she describes the plant and animal species found in the Anan watershed. There is extensive discussion of the Pink salmon life cycle and development of commercial fishing in the area. Explorer George Vancouver noted Anan Bay in 1793, and there has been aboriginal use of the Creek’s natural plenty since the beginning of human occupation in Southeast Alaska some 10,000 years ago. A great sidebar and continued discussion in the text relates to the Tlingit Cycle of Food and the methods used to capture the salmon. Later industrial fishing endangered the resident Pink salmon population and would prove a driving issue in establishing Alaska Statehood.

The greatest strength of Anan Stream of Living Water is its treatment of the legend, lore and life history of the region’s prime attraction, the bears. Bonnie relates the Tlingit stories of the bears, describes their biology and history within the region, and details the differences found between the Black and Brown species of bear. The USDA – Forest Service operates a wildlife viewing facility at Anan Creek that takes great advantage of the bears feeding on Pink salmon migrating into the stream. The role of the Forest Service at Anan is explained and the author forwards really useful information on bear photography, viewing safety, rental cabins, suggested reading, and contacting local guides. The book enjoys an extensive bibliography and subject index. 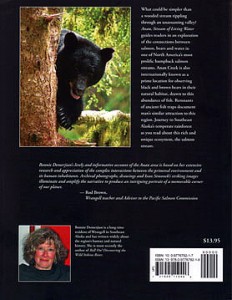 As my friend, Rod Brown of Wrangell states on the back cover, “Bonnie Demerjian’s lively and informative account of the Anan area is based on her extensive research and appreciation of the complex interactions between the primeval environment and its human inhabitants. Archival photographs, drawings, and Ivan Simonek’s striking images illuminate and amplify the narrative to produce an intriguing portrait of a memorable corner of our planet.” I couldn’t agree more with Rod. Anan Stream of Living Water is available from Stikine River Books.