The Economic Impact of Alaska Seafood 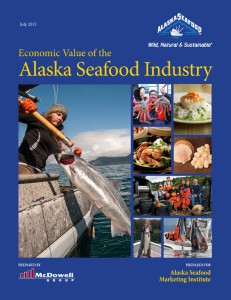 A recently published study sponsored by the Alaska Seafood Marketing Institute highlights the economic impact of Alaska seafood within the State, the Pacific Northwest and the country as a whole. Conducted by the McDowell Group, the report details direct, indirect and induced economic effects generated by the Alaska seafood industry. The McDowell Group also provides substantial background information, harvest totals, production values and overall participation in the industry.

A summary of key points made in the report, detailing the effects of Alaska fisheries on the economies of the United States, Washington State and Alaska, is shown below. Results are based on the latest data available, most of which was published in 2011.

Impacts on the United Stated Economy

Impacts on the Alaskan Economy

Impacts on the State of Washington

The McDowell Group report notes, “Alaska accounts for over half of U.S. wild-caught seafood production, by volume. If Alaska were a country, it would be the world’s 7th largest seafood exporter, by value. The Alaska seafood industry is a powerful economic engine within Alaska, but also creates significant impacts in the “Lower 48.”

The report, Economic Value of the Alaska Seafood Industry, can be downloaded directly from the ASMI website. This document is an excellent resource for those interested in learning more about the Alaska seafood industry and provides solid background information on this industry sector.