Honeywell Promises to Improve the Quality of XTRATUF Boots

Alaska Senator Mark Begich confronted the Honeywell Corporation in October of 2012 about the quality of XTRATUF boots now being manufactured by the company in China. The rubber boots hold a near cult following in the Great Land and seeing their production move outside of the United States has upset many Alaskans.

Honeywell Vice President Richard Graber responded to Senator Begich’s concerns about their product quality and offered some insights on how the company planned to improve customer satisfaction in a letter dated October 16, 2012. One promise made was to immediately listen and learn from customers in an effort to better understand their experiences.

Graber states that their distributors and retailers would continue to offer immediate replacement of XTRATUF boots with no questions asked. Further he says that the company has personally responded to every customer complaint they have received and they have dedicated the resources needed to provide a refund or replacement as required.

Honeywell asserts extensive improvements were made to their production facility in China and that improved training has ensured the proper application of adhesives and placement of foxing on the base of the boots. This addresses a major concern of users that have had the soles of their boots come loose. According to the company, an inspection of all inventory at the wholesale and retail levels was made between May and June to remove any questionable boots from their inventory. 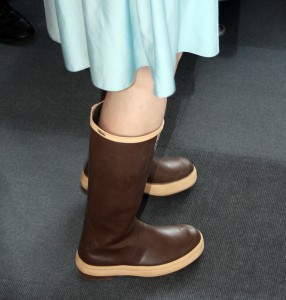 Richard Graber points out that Honeywell has been conducting comprehensive field and laboratory tests of the boots, comparing the boots that were manufactured both before and after production improvements were made. Graber says the company is working with a third party laboratory to test XTRATUFS in extreme conditions. Senator Begich noted that the field testing should be done “…in Alaska where the boots really get worked hard.”

In a perfect world, Congress would work with companies like Honeywell to bring manufacturing back to the United States. We look forward to having our XTRATUFS again and SORTOFTUFS are relegated to a distant memory. If you have a problem with your XTRATUFS, return them to the dealer or contact the company at: