Traditional Nautical Superstitions: Touch the Cold Iron and Speak Not of the Man with the White Collar 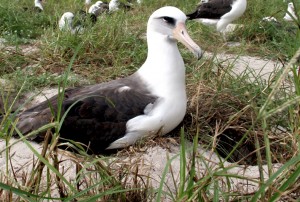 Sinistrophobia – Sailors seem to be every bit leery of things left-handed. A consciousness seafarer would never step on or off a ship with the left foot. The process involved with reversing the misfortune of stepping off on the wrong foot is even more torturous. Some Scottish fishermen believe a left boot is unlucky, while a found right boot should be nailed to the mast to bring good fortune.

Animal Influences – Many different creatures play a role in the superstitious nature of mariners. A great distance flyer of the South Pacific, many believe Albatrosses carry the immortal souls of lost sailors and woe to the seaman that kills one of them. A black cat appears to be a good omen to most sailors, much the opposite of society since the Middle Ages. Mariners strove to keep a content and well-fed cat onboard during their voyages. A pod of dolphins following the wake of a vessel is thought a sign of good luck, while malingering shoals of sharks can only spell doom for the ill fated crew. A skipper finding a rabbit or hare onboard is likely to forestall his journey for another day. Ultimately, rats leaving a ship is definite sign of trouble ahead.

Plants and Flowers – Many fishing boat skippers will not abide a green plant in the wheelhouse. They say plants seek the earth and that’s not a good characteristic for a seaworthy vessel. Flowers can serve many purposes, especially for funeral wreaths. That’s enough reason for sailors to keep them off a well ordered ship.

Thank God it’s Friday? – Leaving port on Friday is poor form in the mind of the well traveled sailor. The superstition is thought to spring from the crucifixion of Christ on Good Friday. Doubters would believe the career mariner would like an extra day in port. Legend says the British Navy fought this superstition to the point that they laid the keep of a warship on a Friday, launched the vessel on another Friday, named the craft HMS Friday and sailed it out of port for the first time on Friday. As you should suspect, it never made it back to the harbor again.

Whistling – One widespread and universal superstition forbids whistling in the wheelhouse or anywhere onboard for that matter. Whistling onboard will raise a gale, hence “whistling up a storm”. It’s not good form to whistle on the neighbors boat as well. Another unpopular sound is that of ringing bells at sea. In Miles Wallingford by James Fenimore Cooper, the protagonist during a becalmed period mentions the superstition, “There were, now, intervals of dead calm; then the air would return in little puffs, urging the great mass heavily onward. I whistled, I prayed, I called aloud for wind; in short, I adopted all the expedients known, from that of the most vulgar nautical superstition, up to profound petitions to the Father of Mercies.”
Hearing a bell could portend sudden death. Hopefully the bells heard from navigation aids aren’t considered part of this problem.

Women – Mariners are nearly split on the subject of women sailing aboard a vessel. Naming a ship for an engaged woman will make the vessel jealous. Women onboard distract the crew and place it in peril. A figurehead in the form of a naked woman, perched on the bow, calms the sea and her open eyes will guide it to safety. Sailors believe women to be superior navigators. Many women were successful as pirates.

Jonah – Among Christians, the story of Jonah tied the wrath of God directly to the state of the seas. Jonah refused to preach the word of God in Nineveh and God punished him during a storm-wracked voyage. Soon crewmen learned of Jonah’s unfaithfulness to God and threw him over to calm the tempest. Jonah 1:15 says, “So they took up Jonah, and cast him forth into the sea: and the sea ceased from her raging.” Quickly sailors shunned anyone believed to have a poor relationship with God, seeing the potential risk to ship and crew. Being labeled a Jonah soon found the suspect sailor going over the rail in the name of good fortune.

Many strange and wonderful tales are told of the sea. Plenty of timeworn sailors will share their knowledge of such tale with you by the provision of select libations.