Arctic Discoveries: Images from Voyages of Four Decades in the North 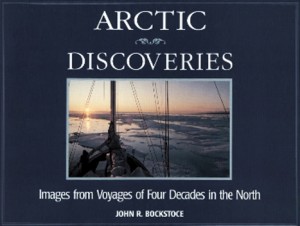 Based on his experiences in Alaska and the circumpolar north reaching back to the early 1960’s, John Bockstoce has arranged many of his photographs into chronological themes that detail Alaska, the North Pacific, Canadian Arctic, and North Atlantic. Arctic Discoveries presents these photographic themes based on Bockstoce’s travels working as a historian and archaeologist in the Arctic.

North Pacific and Western Arctic – Bockstoce first visited the north with an expedition to Saint Lawrence Island near the Bering Strait. John returned every year for the next decade to an archaeological site on Cape Nome and worked as a member of a Point Hope whaling each spring. Areas detailed include scenes from the Bering Strait, Seward Peninsula, Alaska Peninsula, Chukchi Sea, and Beaufort Sea.

Canadian Arctic – John began exploring the Canadian Arctic with his motorsailer Belvedere working his way through the Northwest Passage in 1972. Areas depicted are the Beaufort Sea, Amundsen Gulf, Banks and Victoria Islands, the High and Eastern Arctic.

John Bockstoce introduces us to compelling arctic locations allowing for a mutual sense of discovery. Circling the arctic regions of North American from the Pacific to Atlantic, Bockstoce shares his forty years of exploration in Arctic Discoveries and provides a taste of why the north holds spell over so many of us. John estimates his has traveled 80,500 kilometers (50,000 miles) in the arctic and will continue his adventues in the north. Arctic Discoveries: Images from Voyages of Four Decades in the North (ISBN 029598015X) is published by the University of Washington Press for US $29.95