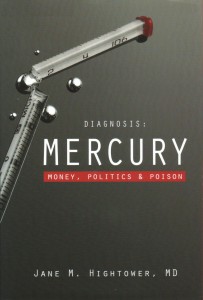 Living in the North has its benefits and for the most part it’s a healthy place to live. One unique health factor is our overwhelming consumption of seafood, enjoying the highest per capita consumption of fish and shellfish of any state in the union. Seafood provides incredible nutritional value, with its high protein content, heart friendly omega 3 fatty acids, multiple vitamins, and trace minerals. The downside to consuming fish in large quantities is the bioaccumulation of methyl mercury picked up by fish in the environment, a subject addressed by Diagnosis Mercury.

Dr. Jane Hightower has just published a book about Mercury and its effects on all of us titled, Diagnosis: Mercury – Money, Politics, and Poison (ISBN 978-1-59726-395-5). As a stated goal for the text, Dr. Hightower says, “Common sense says that if you are not feeling well, and are eating poison, then stop eating it and see if you feel better. The problem is that we are not given enough information about just how much mercury is in the fish that is widely available in stores and restaurants. Most American consumers are simply unaware that the fish they eat could be making them sick.”

Diagnosis: Mercury details Hightower’s educational journey focused on the health effects of mercury exposure that started in the 1970′s. Working in her role as a diagnostician, Hightower was initially puzzled over the significance of elevated levels of mercury found in one of her patients. She wondered if having a mercury blood level of 18.5 micrograms per liter was excessive and if so, what would be a more acceptable exposure. With some effort, Dr. Hightower linked the consumption of fish to her patient’s elevated levels of mercury in the blood.

In researching the effects of mercury, Hightower soon found that there was wide disagreement between the Environmental Protection Agency (EPA) and the Food and Drug Administration (FDA). The EPA was defining a mercury dose of 0.1 micrograms per kilogram of body weight as a threshold of concern and the FDA seemed less interested setting limits or policy to protect consumers. Things in this regard don’t seem to have changed much in the intervening years.

On 13 December 2008, the Associated Press reported that the top two consumer protection agencies, the EPA and FDA, were at odds over the safe exposure limits of mercury found in consumed fish. A draft report was circulated by the FDA that argued for the increased consumption of fish because of its health benefits, while the EPA blasted the effort as scientifically flawed and inadequate. It seems little has been resolved in public policy in the thirty plus years since Dr. Hightower first became concerned over this heavy metal.

Alaskan Influence in the Mercury Debate

As a major national exporter of fish, the State of Alaska and its fishing industry was also involved in the discussion of fish consumption and exposure to mercury. The Clean Air Act of 1990 required the EPA to evaluate the threshold for mercury concentrations in fish tissue that may be consumed without adverse health effects. Alaska’s Congressional delegation felt regulation of mercury levels in fish would adversely affect the state’s economy. During 1998, Alaska’s Division of Public Health published a letter in Science arguing that limits on the consumption of seafood would cause more harm than good through the introduction less healthy alternative foods. 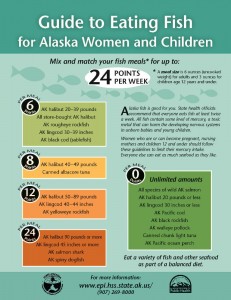 Public recognition of fish consumption and mercury risk has increased and hopefully some attitudes have changed because of efforts like those of Dr. Hightower. The Alaska Division of Public Health has been actively involved in the testing of fish coming from the state and has published a guide aimed at women and children to limit the intake of mercury from fish. Suggestions found in this fish consumption calculator could benefit everyone. On a point basis, long lived fish like large halibut, salmon shark or spiny dogfish should only be eaten weekly, while unlimited amounts of wild salmon, small halibut, and Pacific cod can be consumed.

Diagnosis: Mercury – Money, Politics, and Poison and supporting materials being published by Island Press provide seafood lovers with definitive information on safe fish consumption, signs of mercury toxicity, and the safe mercury levels promulgated by various world health authorities. As it is clear in the news of the day, mercury and its impact on people is an important and relevant public health concern. Dr. Hightower’s work greatly contributes to our understanding of these issues of food and health.