Sculpted by Ice: Glaciers and the Alaska Landscape 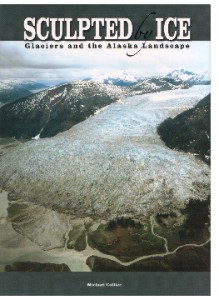 Glaciers are an iconic feature of the Alaska landscape. These rivers of ice cover some five percent of the state and have dramatically molded the very shape of its land. Michael Collier introduces his readers to the wonders of these frozen features of the north in Sculpted by Ice: Glaciers and the Alaska Landscape.

Alaska Glacial History – Collier describes the first visits of Europeans to Alaska and relates their reactions to the great glaciers. Noted adventurers Georg Steller, Vitus Bering, Alesandro Malaspina, and George Vancouver all made remarkable voyages to the Great Land. Naturalist John Muir first came to visit the glaciers of the Stikine River and when on to make Glacier Bay a popular destination for both explorers and tourists alike. The research field of glaciology grew with Alaska representing a natural and immense laboratory for fledgling scientists.

A Plethora of Glaciers – Michael Collier answers the answers the question, “If I’ve seen one glacier, have I seen them all?” with great efficiency, the short answer being no. Glaciers form in warm maritime and colder continental locations. There are cirque, rock, piedmont, and valley glaciers to which contend. Glaciers can end abruptly or terminate at the ocean waterfront. The many possibilities are only clouded by the rapid loss of glaciers from the ravages of climate change.

Visit an Alaska Glacier – A number of prominent glaciers are detailed in distinctive pages found at the end of each chapter throughout the book. Each set of pages starts as a topographic map that shows the glacier along with inset photographs of its features. Accompanying text describes the glacier’s physical location, best viewing access, what else to do in the area of the glacier, how to get there, and provides a URL for website related to the glacier. [Photos of glaciers in Northern Lynne Canal can be seen here at IAA]

Glaciers and Geology – Glaciers are one of three major natural forces that have shaped the Alaskan landscape. The other two are uplift caused by colliding tectonic plates and volcanism. Horns, arêtes, drumlins, kettles, and the like are some of the terms used to describe glacial features that bear the ancestry of early European researchers. There even seems to be an unseemly relationship between the movement of glaciers and tectonics. Advancing and more often retreating glaciers can trigger earthquakes as pent up tension between continental plates is released.

Physical Science and Glaciers – Collins leads the reader through the mysteries of water and ice chemistry. The unique properties of ice and snow factor into the formation of Alaska’s glaciers. Glacier behavior is likewise shaped by the physics of ice accumulation and ablation. Water is generated by, flows through and under glaciers. Cataclysmic outburst floods or jökulhlaups can cause serious damage.

Ice Rivers – It is difficult to imagine the solid substance of ice flowing and traveling at measurable speeds. The author details the basics of basal sliding, base deformation, and internal deformation as glacial transport mechanisms. Glaciers are balanced between freezing and melting, with periods of retreat and advancement. Collier provides great detail on the behavior of advancing tidewater glaciers, some collapsing a hundred feet a day and their active calving of numerous icebergs.

Life on Ice – The last chapter of Sculpted by Ice explains the presence of life in the glacial environment. Glacial fiords are hosts for vast communities of fish and wildlife. Retreating glaciers are natural laboratories in the study of plant succession. Areas like Glacier Bay are seen as important wildlife sanctuaries, refuges for threatened and pressured marine mammal species. The are even a few hardy creatures that live on or in the glacial ice itself.

Final Thoughts – The text finishes with an important discussion of glacier safety and the consequences of global warming. Collier concludes his book describing the experience of flying near Seward, Alaska by saying, “…Dozens of glaciers spilled away from this icefield in all directions, plummeting through their respective valleys towards the sea. Icebergs clogged Holgate Arm and jostled for position in the lake at the foot of Bear Glacier. Here, spread all around me, was ice in every imaginable form. I scarcely breathed, scarcely believed I was flying, so beautiful was this view.”

Publication of Sculpted by Ice: Glaciers and the Alaska Landscape (ISBN 0930931238) was supported through a grant from the US Geological Survey and published by the Alaska Natural History Association with a list price of $29.95. This book is rich in illustrations, photographs, and maps. A list of suggested readings is found at the end of the text.