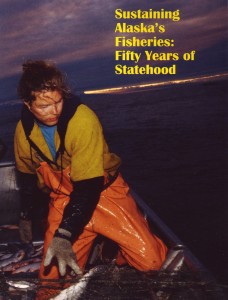 The heath and sustainability of fish stocks has played a major role in the history of Alaska and explains its need to become a state fifty years ago. Harvest of salmon, pollock, halibut and crab has formed the underpinning of the Alaskan economy and sustaining Alaska’s fisheries is of vital interest to state residents.

Alaska Department of Fish and Game (ADF&G) retained Bob King a well-known fisheries journalist to write a book that describes the history of commercial fishing in Alaska in the lead up to the state’s fiftieth anniversary this year. The publication was sponsored through a grant from the Alaska Fisheries Marketing Board and is titled Sustaining Alaska’s Fisheries: Fifty Years of Statehood.

Alaska Department of Fish and Game Commissioner Denby Lloyd says of the publication, “I hope you enjoy this book, as a resource and a reminder of the visionary pioneers, scientists, and leaders who have been a part of developing Alaska’s amazing commercial fisheries.  The stage is set for keeping our fisheries wild and productive, sustaining ways of life and livelihoods for generations to come.”

Sustaining Alaska’s Fisheries is an engaging book that would be an excellent reference for anyone interested in commercial fishing in Alaska. Not only does cover the history of fishing in the state, it was detailed graphics and descriptions of fishing vessel types, a common terminology glossary, commercial fishing seasons and fishing related acronyms.

Here is a synopsis of the chapters found in the book:

Starbound (1949-1959) – Alaska’s history was shaped by its marine resources. Commercial fishing was a driver in the decision to purchase the territory from Russia. Overfishing threatened to destroy stocks and spurred Alaskans to wrest control of its fisheries from the federal government

Taking Control (1960-1969) – After achieving statehood in 1959, Alaska took control of fishery management activities within the state in 1960. The Alaska Fisheries Board was established local advisory committees after statehood to provide greater input and involvement from residents

Triumph and Tragedy (1980-1989) – The 1980’s were marked by many highs and lows. Efforts made to stabilize and protect fish stocks began to pay off for the state’s fishermen. The grounding of the Exxon Valdez in the Prince William Sound caused repercussions that continue to persist today

Rethinking Fisheries (1990-1999) – The advent of fish farming and changes in global demand for Alaska’s seafood caused a reevaluation of fisheries found within the state. Atlantic salmon escaping from fish farm net pens in British Columbia began to cause concern over invasive species upsetting natural fish stocks. The use of fishing quota shares began in the halibut fishery and communities started to get their own fish quotas to spark economic development

Sustainable and Wild (2000s) – While fish stocks throughout the world have crashed; Alaska’s management of fisheries is focused on keeping the resource sustainable into the future. Research efforts have centered on fish genetics and making commercial fishing a safer occupation

Epilogue – A profound change can be seen in the health of Alaska’s commercial fisheries and the management put into place since statehood fifty years ago. Fishing continues to be an economic powerhouse within the state with landings of more than half the seafood harvested in the entire United States at 5.3 billion pounds. The future of fishing in Alaska will depend on continued research and conservative management of its fish stocks.

Fisheries management in Alaska is renowned as the best in the world and its wild fish stocks are a sustainable resource that benefits many people. The state can maintain its leadership if a commitment is made to continue investing in its fisheries.

This publication from the Alaska Department of Fish and Game can be ordered free of charge by sending an email. Be sure to include a mailing address when requesting a copy . Order a copy of this publication via email