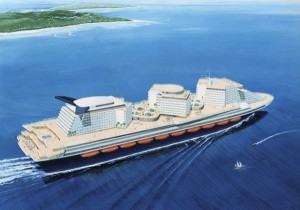 Incidents occurring within the cruise ship industry should give us pause over their safety and operational standards, begging the question: Is it time to require the use of United States flagged cruise ships in Alaska? Marine causalities take place every year with cruise ships, but the incidents with the Carnival Triumph, Carnival Splendor and Costa Concordia highlight the environmental and life safety risks posed by these vessels.

Why Require the Use of United States Flagged Cruise Ships?

Most cruise ships operating in the United States operate under a foreign state flag and are subject to rules, regulations and hiring requirements that are often much different than vessels flagged in the United States. Many cruise ships are flagged under flags of convenience, with companies selecting a country that have minimal safety regulation, environmental standards and corporate taxes.

Congress attempted to mitigate this problem with the Jones Act (Merchant Marine Act of 1920) that limits coastal shipping or cabotage by foreign flag vessels. The Act requires the use of vessels flagged in the United States, crewed by US citizens to operate between our ports. This is seen as an effort to insure marine safety, support the marine industry, protect seaman’s rights and prevent human rights abuses. The Jones Act has been weakened over the years due to the use of loopholes and waivers. It is important to note that the Jones Act is intended to insure vessels operating in United States waters comply with its regulations. Foreign flag vessels don’t need to meet many of these standards.

Recently Stephanie Gallagher, President, World City America Inc., noted that the latest cruise ship mishaps represent only the tip of the iceberg and we should take a closer look at the foreign flagged cruise industry operating within the United States. Americans constitute the majority of passengers aboard the some 150 foreign flag cruise ships operating in our ports. Gallagher points out the economic impact this has on domestic hotels, resorts, casinos and convention centers. She also notes the foreign companies pay few corporate taxes in this country and are not required to hire American crews.

Stephanie Gallagher asks, “Isn’t it time to ask why these ships are not flying the American flag, are not hiring American officers and crew, and are not paying taxes on their multi-billion dollar annual U.S.-sourced profits? Why are they allowed to compete unfairly with Marriott, Westin, Hilton, Radisson, Harrah’s, Wynn Resorts, Las Vegas Sands, Universal Studios, and other U.S. hospitality properties?”

Gallagher’s World City America is an interesting cruise industry initiative that seeks to capture a share of the $40 billion a year market domestically, keeping revenues and jobs in the United States. The company has proposed the America World City as a passenger ship to be flagged in America. Designers envision a vessel that is a self-contained city and a destination in its own right. Developers have invested more than $60 million date in this effort to complete engineered plans and seek regulatory approvals. Project efforts are being lead by Danish Naval Architect Tage Wandborg and admiralty attorney John S. Rogers.

The America World City will offer some unique operational features:

The economic benefits of the America World City project are obvious, tapping into both the cruise and conference markets. This is a cruise ship that would benefit the citizens of Alaska, offering both the opportunity for people to visit the Great Land in responsible manner and offering great jobs for our own mariners.