Kennecott National Historic Landmark: A Glimpse Back at the Alaska Syndicate Mining Empire 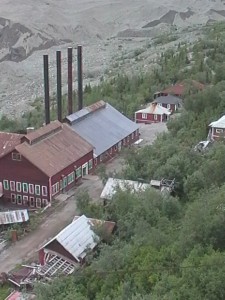 Kennecott is a historic mining town tucked away in a corner of the great Wrangell-St. Elias National Park and Preserve. Built to claim a truly huge and rich copper deposit in some of the wildest terrain of Alaska, much of this mining town remains in place. Congress designated Kennecott as a National Historic Landmark in 1986 and the site was taken into the National Park System in 1998 as part of the Wrangell-St. Elias Park.

History – Geologists with the U.S. Geological Survey (USGS) first explored the region surrounding Root and Kennicott glaciers in 1899. They reported the area’s geology as favorable for copper formations. The Kennecott mine and town site was named after the nearby glacier, but there a misspelling of the name at some point in its history. Armed with the USGS information, Clarence Warner and “Tarantula Jack” Smith discovered a massive copper outcropping near the eastern edge of Kennicott Glacier. A guide with St. Elias Alpine Guides, the company that provides tours through the Kennecott Mill, remarked that “Tarantula Jack” had to be the perfect name for an old time prospector. The claim was referred to as the “Bonanza Mine Outcrop” and eventually came under the control of a mining engineer named Stephen Birch. Initial assays found the ore discovery to contain 70% copper. Modern copper mines are profitable with ore at the 1.5% copper levels.

Birch joined forces with eastern business partners, the Guggenheim Brothers and J. P. Morgan, to form the Alaska Syndicate. The group was even part of a political scandal involving President Taft, Gifford Pinchot of the Bureau of Forestry, and Seattle attorney Richard Ballinger. The Syndicate established the Kennecott Copper Corporation in 1915, built the 196-mile Copper River and Northwestern Railway to tidewater at Cordova, and organized a steamship company to carry ore to Tacoma, Washington for processing. Birch’s group controlled the entire infrastructure necessary to bring the copper to market. Kennecott was a fully functional company town that employed nearly 600 people. There was a general store, powerhouse, hospital, hotel, bunkhouses, schoolhouse and recreation hall. As a company town, Kennecott was dry and adult entertainment was found in nearby McCarthy. Once it was apparent the copper ore was playing out, the company abruptly ceased operations and pulled out of the town in November of 1938.

Location – Kennecott is located within the Wrangell-St. Elias National Park, the largest park within the United Stated. Combined Glacier Bay National Park and Canada’s Tatshenshini-Alsek and Kluane National Park the reserves form the world’s largest UNESCO World Heritage Site. Kennecott is approximately 94 miles from a junction of the Richardson Highway to near the community of McCarthy. The first 35 miles is on the Edgerton Cutoff to Chitina, which is paved. The remaining 59 miles are on the gravel McCarthy road from Chitina. Chitina’s historic hotel was recently renovated and is a great place to visit for lunch or dinner. Most car rental companies will not want to hear you have taken one of their cars on the road to McCarthy. Vehicle access is limited to McCarthy and Kennecott, most visitors cross a footbridge to reach the mining town sites. A shuttle operates in season with pickups every thirty minutes at the footbridge. A round trip to Kennecott is well worth the $10. An air taxi service operates out of the McCarthy Airport.

Lodging and Activities – There are many accommodations to be had for travelers in McCarthy and Kennecott. Cynthia and Andy Shidner of Currant Ridge Cabins are located two miles from the McCarthy footbridge. The family first settled in the area in 1993 and have built six comfortable guest cabins that are available for rental. Rates are $169 per night. Cynthia is a teacher and Bob works for the Park Service. The couple is a rich resource of information on the historic region.