A Story about Chowder by Bryn Harris 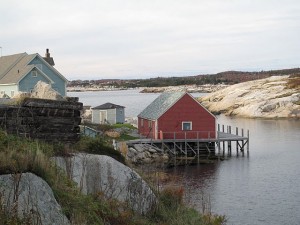 This is a little story written aboard the lovely sloop Spartina, a Trident Voyager 35 who is celebrating her 33rd birthday on March 23rd, 2010. After living aboard for two years in Ontario, my partner and I left in July 2009 and sailed Spartina down the St. Lawrence. That story is told at our Spartina Group site.

During the trip we’ve come up with lots of amazing concoctions in the galley. We tend to make things by hand. In addition to the usual cruising fare such as bread and biscuits, we make our own pasta and polenta. I’d never made seafood chowder before we landed in Halifax, but I suppose it was only a matter of time before I started teaching myself how. During the trip, motivation came in the form of free fish tossed into our cockpit numerous times.

After asking my first mate, “If they can do this with fish, why not lobster?” I was thrilled when Sea Prowler, a P.E.I. trawler in Northumberland Strait, tossed over a couple of 1 1/2 pounders, after asking us if we liked lobster. We nodded enthusiastically although privately I didn’t understand the question. I now realize that around here, the answer is by no means a given, since a lot of the locals don’t consider oysters, clams, or lobster to be fit for consumption.

Now, with success in the chowder production area, I’m ready to go public. I was recently writing a post to the Spartina site and for some reason I set myself the challenge of creating a “tweet” (twitter post) that would capture the essence of chowder. The limit in twitter is 140 characters; here is my 139-character masterpiece.

In the greater scope allowed by today’s post, I want to add something about the ingredients, but I don’t think I’ll introduce proportions. Proportions, after all, vary depending on what you want, what you need, and perhaps most importantly, what you can find. Real cruisers don’t fit their ingredients to the recipe but fit the recipe to their ingredients.

Although it’s true that we are on a 6-month stint at the dock, we still consider ourselves cruisers in a lot of ways. We live frugally, which allows us to cruise for longer, although that’s not the only reason. We borrow books and movies from the library. We pick up paying jobs where we can get them. And when we shop for groceries, we’ve gradually learned to look for what’s cheap and plentiful in the area. In a biggish city (Toronto, Montreal, Halifax) this often equates to looking for what’s on sale at Sobey’s!

With that in mind, the seafood in the chowder can be pretty much any fish or shellfish. The fish counters at places like Sobey’s in our area often have mixed seafood bits that are very economically priced, and they make delicious chowder. Living frugally, however, does not mean that I use skim milk or saute my onion in oil. No, I use heavy cream and saute the onion in butter. Obviously you can go the low-fat route if you insist, but I’m afraid I won’t be able to guarantee the results.

Moreover, I’m particularly inspired by the lobster stew at Henry House, one of Halifax’s most venerable establishments. Not frugal! To make my own wonderful lobster stew, I used some ideas from Ken’s Soup Krazy, a book I picked up for free at a marina book swap (you’re getting the picture). That’s how I learned that a soupcon of cognac can make a great statement in a creamy chowder.

I hope you enjoy the recipe and we meet in a port somewhere down the sea road.