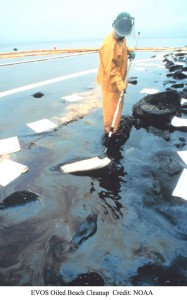 The 20th Anniversary of the Good Friday Spill: Most of us remember where we were on Good Friday, the 24th of March in 1989, when the Exxon Valdez went aground on Bligh Reed in Prince William Sound. The resulting release of 11 millions gallons of North Slope crude oil has proven to continue its impact on the people, environment and industry of Alaska.

One of the results arising from the Exxon Valdez oil spill (EVOS) was formation of the Exxon Valdez Oil Spill Trustee Council funded by the settlement of a lawsuit filed by the State of against Exxon Corporation. The Trustee Council was established to oversee restoration of Prince William Sound and adjacent oiled areas with the $900 million civil settlement resulting from the suit. There are two components found in the EVOSTC organization, the Trustees representing the interests of the state and federal governments, and a public advisory council formed of stakeholders with interests in the oiled regions.

The EVOS Trustee Council develops and publishes regular reports on their progress in environmental restoration efforts and the condition of the oiled regions of the spill. The organization’s 2009 status report is titled Legacy of an Oil Spill 20 Years after the Exxon Valdez. A full copy of the report is available for viewing and download at the EVOSTC website.

In this report to the public, the Trustees detail the status of restoration work, ongoing research efforts, strategies for wildlife habitat protection, and the effect of the spill on people. This report is unique because the Council has made an effort to discuss the impacts of the spill on people linked to the region, and improvements made in oil spill prevention and response technology since the spill.

Status of the Restoration

An astonishing disclosure the Trustee Council has found that the crude oil still present on the beaches of Prince William Sound is almost as toxic now as it was just after the spill. Crude oil remains in Prince William Sound, along the Kenai Peninsula, and the Katmai Coast, mostly in the mid-intertidal zone. Research estimates the oil is working its way out of the environment at a rate of 0 to 4 percent a year. There is a limited chance that it really ever could approach the upper end estimate of 4 percent.

Research continues to study the fate of animals indigenous to the Sound. Sea otters, Killer whales, and Pacific herring are among the species of interest. The report shows that populations of Pacific herring and Pigeon guillemots are not recovering from the spill. There has been progress seen in the recovery of Barrows goldeneyes, Killer whales and mussels. Trustees have additionally looked at the recovery of commercial fishing, subsistence harvesting and recreational use of the region.

Research Sponsored by the EVOSTC

Much of the research sponsored by the EVOSTC is centered on developing a better understanding of the marine ecosystem. A number of major research projects were launched by the Council to address this knowledge gap.

Other research efforts have included studying herring restoration, use of high-pressure water streams to clean beaches, developing new tagging methods to identify Pink salmon, use of remote cameras to monitor fish streams, and biomagnifications of toxins in the environment. 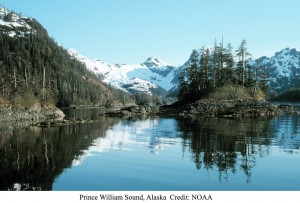 Preserving habitat is a major mission of the Trustee Council. Acquisition of land or habitat property rights within the spill for preservation of wildlife habitat is something that EVOSTC has pursued aggressively. Habitat has been preserved to complement state marine parks and areas identified as especially important near wildlife refuge and park lands. Several Alaska Native corporations worked with the Trustees to permanently preserve habitat.

It is recognized that the lives of the people in the oiled region was disrupted and changed after the accident in 1989. The Trustee Council has looked at the continuing effect the spill has had on passive use, subsistence, commercial fishing, recreation and tourism.

Quoting the report, “Twenty years later, the spill and the effects of the lingering Exxon Valdez oil in the ecosystem, continue to affect the social fabric of native villages and communities throughout the affected area. Subsistence gathering in some intertidal areas has never resumed and commercial herring fisheries remain disrupted.”

Many improvements have been seen in oil spill response and prevention efforts in Prince William Sound. Among these are the use of two escort vessels while tankers in the Sound, training of marine pilots, satellite monitoring of transiting tankers by the Coast Guard, improved skimming capacity for oil spill responders, increased storage capacity for recovered oil-water mixes, dispersants stockpiled for immediate use,adoption of more realistic contingency plans for handling spills, and annual spill drills.

Legacy of an Oil Spill 20 Years after the Exxon Valdez – Exxon Valdez Oil Spill Trustee Council 2009 Status Report provides a comprehensive overview of the Trustee Council and its efforts to mitigate the effects of the Good Friday oil spill. It represents an excellent resource for anyone seeking to gain a more solid understanding of the incident and the response to it in Alaska.