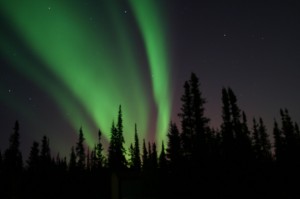 Alaska being part of the circumpolar north experiences displays of northern lights or Aurora Borealis frequently in the winter months. These natural light shows can stretch from horizon to horizon and display remarkable variations in their color and intensity. Aurora viewing is popular with Alaska residents and visitors alike. Being able to witness the northern lights depends on a combination of favorable solar activity and clear skies. One way that you can improve the odds of viewing a good auroral display is to consult the aurora forecasts made by the Geophysical Institute of the University of Alaska Fairbanks (UAF).

The Science of Space Weather

Auroras are created at extreme latitudes as highly charged particles erupting from solar disturbances stream into the upper atmosphere of the earth. The color of the aurora depends on the altitude of the aurora and atmospheric density found at that level. Auroral altitudes can vary from 80 to 600 kilometers above the earth’s surface. Atmospheric gasses like oxygen and nitrogen display unique colors when charged particles strike them with enough force to split their molecules. Oxygen produces red and green lights, while nitrogen creates blue to red to purple colors.

The best time to view auroras is at around local midnight. Viewing is impacted by factors like cloud cover, moonlight and local pollution. Pollution in this instance can include things like wood stoves and stray light from sources like unshielded streetlights. Auroras ebb and flow through the evening and serious viewers will be outdoors several hours before and after local midnight.

The flow of charged particles composed of electrons and photons generated by solar eruptions is known as the solar wind. This solar wind is the engine that generates the northern lights and there are ways that scientists can predict the impact of these particles in the atmosphere. Energy generated by a solar storm takes two to three days to reach the earth. The path of these particles is affected by outside forces and the condition of the earth’s magnetosphere. Another factor is the rotation of the sun. Since it takes 27 days for the sun to rotate, an active region of the sun that generates auroras today could create similar effects in another 27 days.

The UAF Geophysical Institute provides long, medium and short term aurora forecasts. The long term forecast is based in part on what happened with the sun 27 days ago. The main forecast product is for 3 to 7 days out and based on direct solar observations. One hour, short term forecasts are derived from satellite data as solar energy nears the earth. Auroral activity is predicted by the relative level of the planetary magnetic index (Kp) and is broken into nine levels of activity.

The UAF Geophysical Institute offers the aurora viewing public access to an alert system that notifies recipients for potential auroral activity. When predictions of planetary magnetic disturbance are greater than a Kp of 5, an email alert is sent out. There is also an online auror alert forum maintained by the Institute for dedicated viewers.

Watching the northern lights is one more reason you should visit and enjoy Alaska.