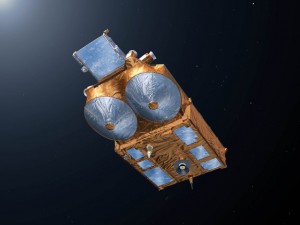 This radar altimeter shoots microwaves into the sea ice and into the cracks within the ice. It is able to measure the distance between the surface of the ice and water, providing an estimate of its freeboard or distance the ice is raised out of the water. This information allows a calcuation of ice volume to be made.

These measurements are showing that the volume of Arctic sea ice declined by 36% in the fall and 9% in the winter between the years of 2003 and 2012. Sea ice extent records show a continued drop in area, especially during summer months. September of 2012 saw the lowest sea ice extent recorded of 1.4 million square miles. Scientists have been able to correlate the decline in sea ice extent with a significant decline in ice volumes.

Researchers now estimate that 1,000 cubic miles of ice in the fall and 360 cubic miles in the winter have been lost in the Arctic since 2008. Data was tested using ground and airborne instrumentation, then compared to measurements made by NASA’s Operation IceBridge.

In a press release, Katharine Giles says, “The data reveal that thick sea ice has disappeared from a region to the north of Greenland, the Canadian Archipelago and to the northeast of Svalbard.” Giles is a co-author of the study CryoSat-2 estimates of Arctic sea ice thickness and volume, published in Geophysical Research Letters.

CryoSat Mission Manager Tommaso Parrinello adds that “Other satellites have already shown drops in the area covered by Arctic sea ice as the climate has warmed, but CryoSat allows scientists to estimate the volume of sea ice – a much more accurate indicator of the changes taking place in the Arctic.”

This first study stemming from CryoSat data represents a large collaboration of researchers, organizations and agencies. It was the brainchild of Professor Seymour Laxon, Director of the Centre for Polar Observation and Modelling at University College London, who passed away in January of 2012. Polar scientists are looking forward to additional contributions to be made by the ESA CryoSat mission.