Glacier Change from Icefield to Ocean Affects the Future 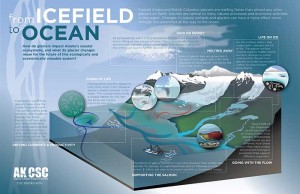 The “From Icefield to Ocean Poster” depicts the important linkages between glaciers and the ocean. The product is a result of Alaska Climate Science Center research projects and workshops. The team felt that it was particularly important to find a compelling way to communicate these research findings to Alaskans because Alaska’s coastal glaciers are among the most rapidly changing areas on the planet and glacier runoff can influence marine habitats, ocean currents and economic activities.

Glacier icefields cover a significant part of Alaska and they effect the state’s resource based economy. Power generation, tourism activities and fish productivity are all influence by the behavior of glaciers. Glacier change from icefield to ocean affects Alaska’s future.

Shad O’Neel, a researcher with the U.S. Geological Survey has coauthored a paper that begins to address the connections that exist between high country ice fields feeding glaciers that fed vast quantities of freshwater runoff into the ocean. The research focused on the temperate rainforests of southeast and south-central Alaska, investigating the effect of glacier mass loss is having on their physical, chemical and biological linkages to nearshore glaciers. Alaska is seeing some of the highest rates of retreat in its glaciers worldwide.

In a press release, O’Neel says, “This winter provides an excellent example of what the future may hold for coastal Alaska with winter storms coming in as rain instead of snow and limiting ski and motorized recreation for tourists and residents alike. Less thought is given to how the low snowmelt runoff will impact nearshore ocean currents, ocean stratification and phytoplankton blooms that are essential for salmon populations.  One winter like this, here and there, is probably something the ecosystem can tolerate, but if this winter becomes the new normal we need to develop a better understanding of the impacts on the ecosystem.”

The complex interaction of ice fields to the ocean ecosystem highlights the need to coordinate efforts of researchers and natural resource managers from across a wide range of scientific disciplines. The coastal rainforest environment is important to the natural resource and tourism economies of Alaska and British Columbia. Only after the multiple stakeholders come together can better ecosystem management information be provided to regional decision makers.

In their paper, the researchers recommend “A holistic scientific approach should be undertaken to begin to resolve these uncertainties in ways that maximize utility to the resource management community and allow efficient and informed decision making in an era of rapid ecosystem change.”

The paper Icefield-to-Ocean Linkages across the Northern Pacific Coastal Temperate Rainforest Ecosystem has been published in journal BioScience and is available online.