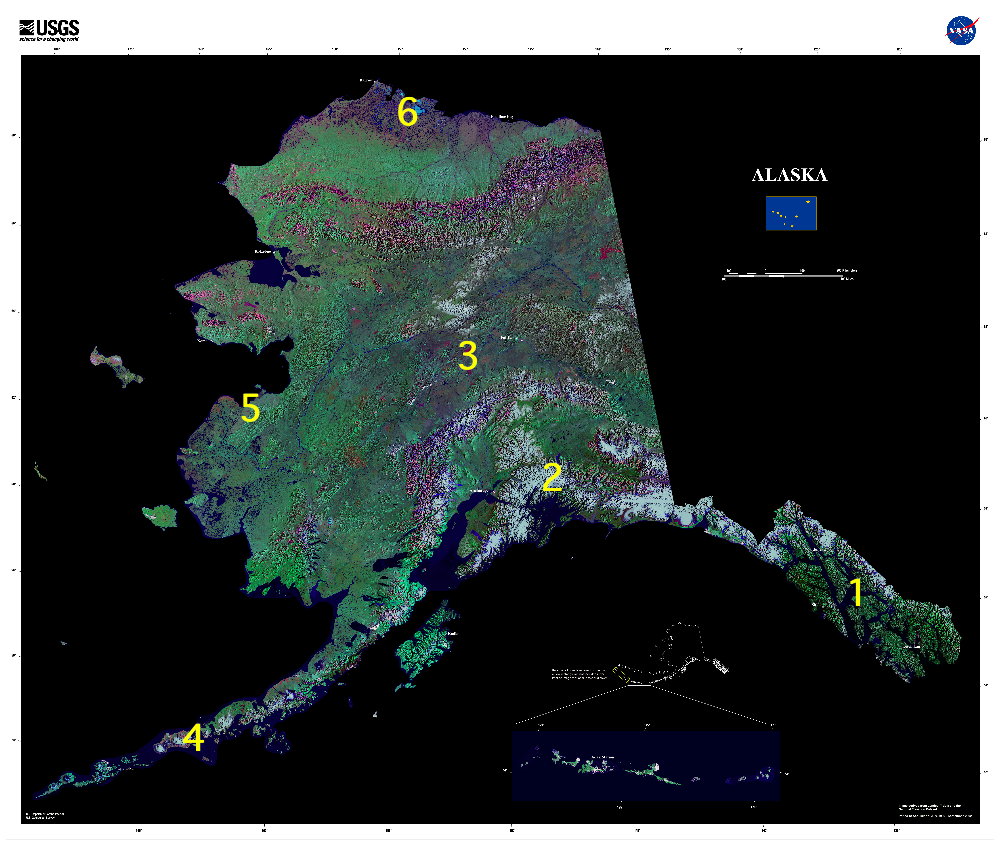 An inability to comprehend the great distances found in Alaska is a realization newcomers often encounter in the Great Land. Alaska defies their attempts to compare it with past experiences. Terrain varies immensely and distances between regions are vast. A useful way to understand Alaska is consider it as six states within a much greater one.

1: Southeast Alaska – This is the coastal panhandle of Alaska that lies immediately west of British Columbia, Canada. This region is marked by massive mountain ranges along the coast and an offshore archipelago of a thousand islands covered by old growth Sitka spruce and Yellow cedar. Southeast Alaska is noted for its fishery resources and the great Tongass National Forest. The State Capital Juneau is located in the heart of the region and like many Southeast communities is only accessible by sea or air.

2: Southcentral Alaska – With most of Alaska’s population residing in this region, Southcentral is the most metropolitan section of state. The majority of Alaska’s residents live in the Municipality of Anchorage with its 283,938 residents, while many more live in the nearby Matanuska-Susitna (Mat Su) Valley. Mat Su is the center of the state’s farming community. Much of Southcentral borders the Gulf of Alaska with its Prince William Sound and Cook Inlet. Headquarters for most major industries in the state are found in Anchorage and there is a substantial military presence there with Fort Richardson and Elmendorf Air Force Base.

3: Interior Alaska – Fairbanks is known as the Golden Heart of the Interior and was founded by the gold industry that still currently supports the regional economy. Temperatures in the Interior can be extreme, ranging from +90º F (32º C) in the summer to -60º F (-51º C) in the winter. Long summer days produce remarkably large vegetables and impressive swarms of mosquitoes. The Interior is the historic home of Koyukon Athabascans that have lived here for millennia. The Yukon River remains an important transportation corridor in Interior Alaska.

4: Southwestern Alaska – The Aleutian Peninsula and its archipelago of islands extend some two thousand miles (3,200 kilometers) into the Pacific Ocean. This chain of islands divides the Bering Sea to the north from the Pacific Ocean to the south. The region is active volcanically, with three eruptions occurring in less than a month during the summer of 2008 and is home of Katmai National Monument, Land of Ten Thousand Smokes. Weather in Southwestern Alaska is generally cool and foggy, with mild winters. Much of Russia’s influence in Alaska occurred with the Aleut Eskimos of the region and many Russian Orthodox churches remain in use here.

5: Western Alaska – Running north along the coast from the Aleutian Peninsula, Western Alaska takes in Bristol Bay, the Yukon-Kuskokwin Delta, Norton Sound, Seward Peninsula and many offshore islands. Most towns and villages are located along the river and ocean shores of the region. Commercial fishing and subsistence gathering are important economic drivers in an area known for it high cost of living. Weather is buffered by coastal influences with cool summers and winters that are moderately cold, but often windy.

6: Arctic Alaska – Comprising the upper third of the state, Arctic Alaska is known as the Top of the World and takes in all of Alaska lying above 66.5º north latitude, the Arctic Circle. Arctic Alaska is home to oil rich Purdue Bay, the controversial Arctic National Wildlife Refuge (ANWR), Gates of the Arctic National Park and Preserve, the National Petroleum Reserve Alaska, thousands of caribou, and very few people. Native people in the region are mostly Inupiat Inuit Eskimos living along the coast of the Northwest Arctic and North Slope. The Gwich’in People live closer to the Canadian border on the Arctic coast and depend on the Porcupine caribou herd that lives on the Arctic coastal plains for subsistence. These plains include lands found in ANWR and contribute to Gwich’in concerns over oil exploration in the refuge. Temperatures average a -17º F (-27º C) in the winter and only rarely reach over 40º F (5º C) in the summer.