Icebergs calving from Columbia Glacier and drifting into the vessel traffic lanes frequented by oil tankers transiting Prince William Sound has long been a subject of interest to the Prince William Sound Regional Citizens’ Advisory Council (Council) and especially its Port Operations and Vessel Traffic System (POVTS) Committee. Historically, the Council was participated in pioneering research conducted by Austin Post and Wendell Tangborn in the late 1990s, with the first Columbia Glacier Iceberg Monitoring Project (IMP).

Columbia Glacier has been in a state of rapid retreat since the early 1980s, having retreated some 17 kilometers and undergoing a reduction in mass of about 150 cubic kilometers. Most of the glacier mass reduction has been in the form of calved icebergs. Icebergs flushed out of Columbia Bay drift with the current and wind into an area near the Valdez Narrows, running towards Bligh Reef. During certain periods, icebergs can drift surprisingly far into the greater Sound.

Icebergs have caused problems for shipping in the Sound, most notably incidents involving the oil tankers Exxon Valdez and Overseas Ohio, and the tug Pathfinder. The Council was instrumental in the design and installation of an ice detection radar site on Reef Island and promotion of safe ice navigation procedures.

The continued Columbia Glacier Iceberg Monitoring Program being sponsored by the Council this year is being conducted by two well-known glaciologists, Doctors Tad Pfeffer and Shad O’Neel. Dr. Pfeffer is regarded for his work in glacial retreat and ocean-ending glacier studies worldwide. Dr. O’Neel has been extensively involved with research conducted at Columbia Glacier and works out of the Alaska Science Center in Anchorage. 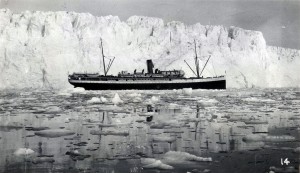 Work being conducted by Pfeffer and O’Neel will seek to summarize the current state of knowledge concerning the retreat of Columbia Glacier, especially in the interval that has taken place since the original IMP. The two researchers have been given full access to the photogrammetric data set of Columbia Glacier observations since the 1970s and data acquired by Post and Tangborn in the first IMP.

An attempt will be made to document the current rate of iceberg calving and drift trajectories. Our researchers intend to reevaluate the concept of calculating glacier retreat rates using photographic records of daily terminus changes. They will also reevaluate the mass balance and iceberg production model developed by Post and Tangborn in 1996 to 1998. Ultimately the project hopes to develop a forecast for iceberg production generated by Columbia for the next ten years.

Goals for the project are to determine the best estimate of glacial retreat and volume loss, evaluate iceberg transport into the Sound and describe the passage constraints of icebergs over the Columbia Glacier moraine shoal. The first report produced by this project, describing available data for Columbia Glacier, is available from the Council. This project funded by the Council, is a great example of leveraging the work being done by others to promote marine safety in Prince William Sound.