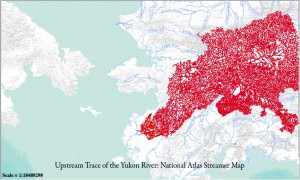 The United States Geological Survey (USGS) has released a new way to visualize stream flow online with Streamer. This online mapping system allows water flow to be traced up or downstream from its source to where it empties into the ocean. Streamer relies on map data resolved at one million scale from the National Atlas of the United States.

Streamer displays data scaled at one inch to 15.8 miles, which will leave out some smaller streams. Tracing the Yukon River upstream with the application maps a remarkable drainage basin that would grow even more at a finer scale resolution. An example of a map generated by Streamer for the Yukon River is at the head of this post.

The reporting feature of the site details information on water bodies and streamflow gauging stations along the traced stream. This report also provides other geographic data for the areas encountered by the stream.

This is an example of the information provided for a trace of the Yukon River downstream from the Canadian border:

The USGS notes these features are available to Streamer users:

Streamer is part of a greater effort of the USGS to provide improved public access to geographic data and information that is collected by the government. It would be great to see cooperation in this effort with Canada and be able to trace transboundary rivers like the Yukon and Stikine to headwater sources.