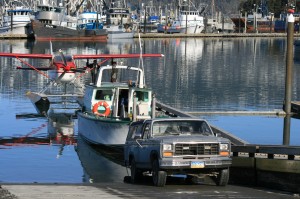 Commercial gillnet fishing boats are a common sight on the Alaska waterfront. Gillnets are used to capture Alaska’s salmon in both personal and commercial fisheries. Gillnets can be fished off a boat or set along the shoreline. A gillnetter is a boat engaged in drift gillnetting, while fishing a gillnet with one end anchored to the shore is called setnetting.

Gillnets are constructed of multifilament synthetic fibers woven into a mesh. Fish are captured when their gill cover plates snag on the fibers. Mesh size determines the size of the fish caught. Larger fish aren’t captured in smaller mesh sizes and fish too small for the selected mesh size will pass through it. Selection of mesh size can determine the species and sex of a salmon being targeted by a fishery.

A gillnet is a curtain of net that hangs vertically in the water. The top edge of the net is supported by floats and is called the floatline. A weighted line called the leadline holds down the lower edge of the net. Nets can be configured to meet fisheries management goals by changing their depth, length, and mesh size. Net depths can vary from 32 to 42 feet and nets can be 900 to 1,800 feet long. Lengths are often expressed in fathoms, which are equal in length to six feet or about two meters.

Migrating salmon tend to follow shorelines. Working a gillnet, fishermen drop one end of the net near the shore. Net is played out from the boat as it moves away from the shore. Once the opposite end of net is released, the crew watches the net for signs of activity. The floatline will often sink when a number of fish hit the gillnet. After the net has “soaked” for a while, it is brought back onto the drum. Fish are picked from the net as they come onboard and placed in the fishholds.

Gilnetters are typically crewed by one or two people and normally range in length from 28 to 45 feet. State statutes limit vessels engaged in the Bristol Bay fisheries to an overall length of 32 feet. Gillnet is stored and feed off the boat on a hydraulically powered drum. Net can be deployed from the bow or stern of the vessel, which also describes the two classes of gillnetters.

Boats fishing off their bows are bowpickers. Often powered with jet drives, they are around 28 feet in length and designed to operate in shallow river deltas. Bowpickers are well represented in the Copper River Sockeye salmon fishery of Cordova, Alaska. Sternpickers work their nets from the back of the boat and tend to be larger vessels operating in deeper waters.

Gillnetting is considered within the fishing industry to be highly selective and an environmentally friendly way to harvest fish. These nets are closely tended by fishermen and shouldn’t be confused with high seas drift nets.

The Alaska Department of Fish and Game is very proficient with adjusting gillnet requirements to manage fisheries effectively. Gillnetters cool fish that are caught with ice or onboard refrigeration systems. Once fish are picked from the net, they are placed in a nylon brailer bag that lines the fishhold. These bags have heavy straps that allow the whole bag to be hoisted out of the boat for delivery. Gillnetters preserve the quality of their fish through careful handling, rapid cooling and making daily deliveries. Fish can be delivered to the dock or a fishing tender located on the grounds.

Gillnetters are just one of the many types of commercial fishing boats seen in Alaska.