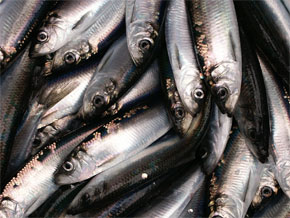 Proper use of plug cut herring is a fishing technique will improve your salmon angling success, especially compared to use of whole baits.

A technique available for successful salmon fishing in the Northwest United States and Alaska is the use of plug cut herring as bait. Plug cut herring consistently fish better than whole baits, especially when targeting Chinook (King) and Silver (Coho) salmon. Using a whole herring can attract the occasional strike, the use of plug cut bait will improve fishing success.

Plug cut herring offer several advantages in attracting salmon compared to use of whole baits. The angled cut of the herring makes it look like a crippled or wounded bait fish swimming through the water. Cutting open the herring releases blood and oil found in the bait, increasing its fish attracting scent in the water. Salmon respond to the sight, sound and smell that plug cut herring provide as bait.

While fishing with a plug cut herring for bait will increase angler success, there are many tricks that can be employed to make the effectiveness of plug cut herring more consistent. Among these techniques are bait selection, geometry of the cut bait, use and injection of attractant oils, solid tied leaders, and selection of terminal tackle.

The size and quality of bait herring used in salmon fishing is critical to its success. Purists often catch their own bait prior to a fishing trip, assuring fresh and brightly colored bait. Individually frozen herring perform better those frozen in a block. Usually smaller herring are the best bet for early season fishing and sizes are increased as the run progresses. Many fishers soak prepared herring in a brine solution to toughen the bait for the hook.

Hand cutting plug cut herring produces different rolls of the bait as it passes through the water. The trolling speed of the boat and current speed impact the roll of bait in the water as well. One way the variables of cutting herring into plug baits is to use a plug cutter that looks like a miniature fishing miter box. A handy angler can craft a personal plug cutter, but it is easier for most fishers to purchase one. One example is the Gilly Killer Kutter Plug Cutter that retails for $18.

Use and Injection of Attractant Oils

Plug cut herring has a scent advantage over whole baits. Anglers can take this one step forward through the use of attractant oils with their plug cut baits. Anglers initially started injecting baits with fish oils using hypodermic needles. Commercial products are now available that have an injector head fitted to a squeeze bottle holding the attractant sold. Using a bait oil attracts salmon and can encourage them to hold until baits longer.

Leaders are the important connection between fishing hooks and the line used to bring in a fish. Knowledgeable salmon anglers learn to tie their own leaders, using premium hooks and leader material to ensure consistent performance and saving a little money in the process. Most recreational fishers use leaders purchased at the tackle shop and think little about them again.

Salmon leaders come in two varieties, slip and solid tied. In a slip tie leader, the angler can change the distance between the two hooks by slipping the forward hook back and forth on the leader. The disadvantage of these leaders is that in the way they are tied, if trailing hook breaks from the leader, the forward can also then slip off the leader.

The two hooks on a solid tied leader are set apart at a fixed distance. If the trailing hook breaks loose, the forward hook will still hold. This is an advantage since many times both hooks of a leader hook salmon.

The proper use of plug cut herring will improve salmon angling success. Try it this fishing season and bring the fish home.