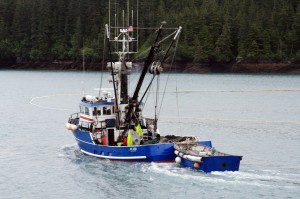 This information highlights the importance fishing has in the United States, whether it’s recreational or for recreation. During 2012, the commercial fishing industry brought in some 9.6 billion pounds of seafood valued at more than $5.1 billion. Another enormous implication is the economic impact commercial fishing has on related businesses and how is it vital to ensure our fisheries remain sustainable.

In a press release concerning the report, Sam Rauch of NOAA Fisheries says, “Healthy, sustainable fish and shellfish stocks are incredibly important to our nation’s social and economic fabric. The high landings and value of seafood in 2012 support the three-decade long effort that has gone into ending overfishing in the U.S. Thanks to our partners, the regional fishery management councils and especially U.S. fishermen, we now have some of the most responsibly managed, sustainable fisheries in the world.”

Dutch Harbor in Unalaska, Alaska again ranks at the top of the list as a major commercial fishing port. Alaska led all states in volume of landings at 5.3 billion pounds and value of landings at $1.7 billion. This is the 16th consecutive year that Dutch Harbor has led in seafood volumes. Seafood landed at the port included Alaska pollock, Snow crab and King crab. While the overall numbers are lower than 2011, 2012 remains a higher than average year, looking at the last decade’s landings. Louisiana is a distance second in volume at 1.2 billion pounds and Massachusetts trails in its value landings at $618.2 million.

Americans consumed just over 14 pounds of seafood in 2012. With a shift in use, this number is slightly lower than 2011. Consumers in the United States spent about $82.6 billion for fishery products in 2012. This includes expenditures at restaurants and retail outlets. $26.8 billion Wild caught seafood is a vital part of the Alaskan economy. It is essential for the public to know the fish they buy comes from our state and is harvested in a responsible manner. The full report is available from NOAA here.