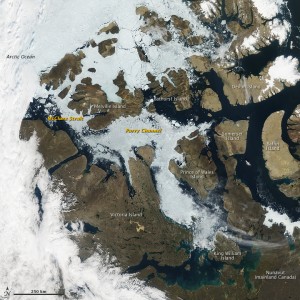 The promise of an open Northwest Passage for shipping has fascinated mariners for hundreds of years. One 1845 arctic expedition investigating the route ended in tragedy for Sir John Franklin and the crews of HMS Erebus and HMS Terror. Parks Canada is searching for Franklin ships lost in the historic mission.

2013 marks the fifth season of field work aimed at finding the missing ships. Parks Canada will be assisted by the Royal Canadian Navy and Defence Research & Development Canada, with a host of other agencies in the search. Searchers will be using autonomous underwater vehicles, side-scan sonar and remotely operated vehicles to find the shipwrecks. The 2013 search area will include O’Reilly Island, Victoria Strait and Alexandra Strait. The identification of potential search areas has benefited from Inuit traditional knowledge.

Environment Minister Leona Aglukkaq says of the effort, “I am proud of the incredible commitment, research capability and momentum this team continues to harness from so many valuable partners each year,” she added “Having already covered more than 800 km2, the team is narrowing their search on the world’s most elusive shipwrecks, while systematically surveying Canada’s vast and largely uncharted Arctic waters. Weather permitting, this year’s search will significantly build upon the important scientific and archaeological understanding in this fascinating part of Canada’s history, and geography.”

Sir Franklin departed England in May of 1845 to search for the Northwest Passage with two converted British warships. The HMS Erebus and HMS Terror served earlier in their careers as bomb vessels designed to support the use of mortars against land based fortifications. HMS Terror participated in the bombardment of Fort McHenry during the War of 1812. Bomb vessels are heavily constructed, making them well suited for work in ice-infested waters. Conversions of the vessels included hull reinforcements and the addition of steam propulsion.

The last sighting of the Franklin expedition by Europeans was by whaling ships in August of 1845. A formal search didn’t reveal the fate of the two vessels until 1859, when a privately chartered search vessel found a message left by the expedition on King William Island. The message reported the lost ships as being trapped in the ice during August of 1846, where they remained for a year and a half.

This message went on to note the death of Franklin and 23 of the crew at the ships. In early 1848, a group of 105 sailors left the ships, hoping to reach help at Back’s Fish River. No one survived the journey and the exact location of the two vessels was lost in time. Canada declared the shipwrecks national historic sites in 1992, intending to protect them in the event of a future discovery.

Northerners are immediately interested in learning more of our history and the exploration of the Arctic. Parks Canada has an extensive website devoted to their search for the Franklin vessels. Ironically, the promise of the Northwest Passage may be coming true. In the photo attached to this story, NASA shows Amundsen’s southern transit of the Northwest Passage below King William Island being free of ice and snow. The northern route has been open several times since 2007.