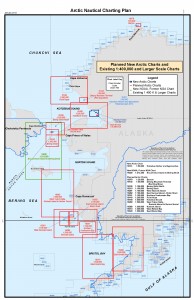 The National Oceanic and Atmospheric Administration (NOAA) Office of Coast Survey is planning an update of Arctic nautical charts. Nautical charts represent the traditional means mariners use to navigate coastal waters safely. The paper nautical chart reaches back into history with President Jefferson who commissioned the first surveys for charts in 1807. Paper charts vary somewhat from maps, they meant to be marked up and bear navigation fixes plotted by their users. Modern electronic versions of these charts fulfill the same role.

Navigational charts are only as valid as the underlying survey data used to draft them. Navigational data shifts and changes over time. In Alaska, the ocean floor has actually rebounded since the Good Friday earthquake in 1964. Being sparsely populated and remote, much of the Arctic has not been surveyed and other surveys are sorely lacking in accuracy. Some charting data hasn’t been corrected since the voyage of Captain Cook in the late 1700’s.

The Office of Coast Survey has published a formal Arctic Nautical Charting Plan in an effort to improve the precision and coverage of northern nautical charts. Growth of oil exploration, commercial fishing and tourism, combined with reduced sea ice packs has prompted the interest in developing better charts in Alaska.

Coast Survey Director Gerd Glang says of the effort, “As multi-year sea ice continues to disappear, vessel traffic in the Arctic is on the rise. This is leading to new maritime concerns about adequate charts, especially in areas increasingly transited by the offshore oil and gas industry and cruise liners. Given the lack of emergency response infrastructure in remote Arctic waters, nautical charts are even more important to protect lives and fragile coastal areas.”

A total of 14 new charts are being planned for United States Arctic ranging from the Alaska Peninsula near Nelson Lagoon to Cape Lisburne along the edge of the North Slope. The charting goal is to better support marine transportation in areas north of the Aleutian Chain.

The Office of Coast Survey is seeking comments from the public on their efforts. They maintain a blog on marine surveying and charting for those that would like to learn more about this topic.