A Review of Best Available Technology in Tanker Escort Tugs 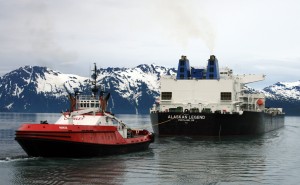 Loaded oil tankers transiting the waters of Prince William Sound in Alaska are required by their oil spill contingency plans to be accompanied by two escort tugboats. Currently escort tugs can serve in a primary or secondary role, depending on performance requirements established in the tanker contingency plans. The ultimate goal of the escort tug system is to prevent an oil tanker that suffers a mechanical or propulsion issue from running aground. The best available technology in tanker escort tugs should be considered for use in the Sound.

Oil tankers operating in Prince William Sound are escorted by tugboats that are part of the Ship Escort Response Vessel Service or SERVS. In the acronym-laden world of oil shipping and government regulation, SERVS is known as an Oil Spill Response Organization or OSRO. This is the organization established in the tanker oil spill contingency plan as being responsible for dealing with spill incidents. Tankers under escort by SERVS operate within an approved framework known as the Vessel Escort and Response Plan or VERP. The VERP details when and where an escort is conducted. It outlines the role of the primary and secondary tug involved in any escort directed by the organization.

The Prince William Sound Regional Citizens’ Advisory Council (PWSRCAC) is a group established by Congress in the aftermath of the Exxon Valdez oil spill that occurred in the Sound in 1989. This group is charged with promoting the safe operation of oil tankers in Prince William Sound. The Council has long been concerned with the stated roles of primary and secondary tugs used by SERVS for escorts. While tanker contingency plans make a distinction in the performance of primary and secondary escort tugs, SERVS routinely swaps its more capable tugboats between these two roles.

The most capable tugboats used by SERVS for tanker escorts are found in two classes of vessel, the Enhanced Tractor Tugs (ETT) and Prevention and Response Tugs (PRT). Enhanced Tractor Tugs are propelled by a Voith Schneider drive that uses a vertical series of blades to direct water in any direction. This ability makes these tugs very maneuverable. The Prevention and Response tugs use an azimuthing stern drive (ASD) for propulsion. The propeller in an ASD is encased in a housing that can rotate in a complete circle, allowing more flexibility in turning than seen with conventional tugs.

Beginning in 2012, PWSRCAC hired the firm of Robert Allan Limited of Vancouver, Canada to compare performance information collected on a worldwide fleet of escort-rated tugboats, over 35 meters in length, to the ETT and PRT Class vessels used in Prince William Sound. Robert Allan is a highly regarded naval architect known for his innovative work with escort tugboats. The goal of this study was to determine if the tugs used by SERVS represent the Best Available Technology (BAT) being used in escort tug design today. Another question focused on the SERVS practice of using the ETT and PRT tugs interchangeably as primary or secondary escort tugs. The Council has taken the stance over the years that the ETT tugs are the only true escort-capable tugs in the SERVS fleet and should be the only vessels used in the primary escort role.

Robert Allan Ltd. found a number of significant gaps in what is considered BAT for escort tugs today and the SERVS fleet. It was noted that neither the ETT nor PRT class of tugboats carries a formal escort notation or rating by a Classification Society. Classification Societies establish performance standards and inspection requirements for vessels used in commercial service. The United States Coast Guard often defers to class societies to perform vessel inspections and ensure compliance with regulations.

Consistent with earlier research work done for the Council, Robert Allan Ltd. pointed out that neither the ETT or PRT tugs are equipped with render-recover tow winches that satisfy class society requirements for an escort notation. A render-recover winch is considered a much safer way to tow a disabled vessel, because it can automatically compensate for changing loads on a towline caused by varying wind and waves. It was found in this study that the PRT tugs do not have a hull form appropriate for indirect towing and are limited in their ability to generate the indirect forces necessary to counteract the rudder forces generated by the larger tankers that operate in the Sound.

The report A Review of Best Available Technology in Tanker Escort Tugs is available from Valdez and Anchorage offices of the PWSRCAC. It is the conclusion of this research report that neither the ETT or PRT class of tugs represent BAT found in use by escort tugs today. In the decade since these vessels were built, technology in hull design and towing equipment has improved dramatically. In their present condition, the ETT class tugs are effective escort tugs that would benefit greatly from installation of a better towing winch system.

The PRT class tugs significantly lack escort towing capability and it would be expensive to change them in a way that would provide this escort capability. That said, there are things that could be done to improve their escort performance. These include installing a render-recover towing winch, relocating a skeg on the hull forward and providing a towing staple further back on the tug that could handle higher towline forces.

This latest effort by Council is one in a series of studies done to improve the tanker escort system used in Prince William Sound and help prevent crude oil from being spilled. While improvements to escort tugs are expensive, the costs are minuscule when compared to the economic and environmental cost of another oil spill in the Sound. World class standards for escort tugs have been established for good cause and should be respected in Alaska’s crude oil transportation system.