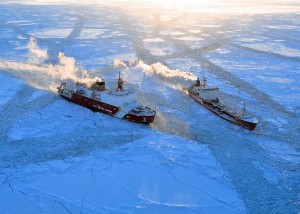 The Alaska Department of Transportation and Public Facilities and US Army Corps of Engineers have released their draft report covering the first year of a three year study to enhance the deep-draft port system of Arctic Alaska. Port facilities in the north are minimal and range from simple gravel landings to extensive bulk mineral export terminals.

Large vessel traffic in the Arctic is increasing due to a number of recent developments. Retreating sea ice, increasing energy exploration and attractive marine shipping options have opened up the Arctic. Combined with many other issues, the need to develop a deep-water seaport in the Arctic has become a priority for the United States government.

Stakeholders involved with this study decided to focus on the Alaska coast from Bethel west to the Bering Sea, then north along the Chukchi Sea and on to the east towards Canada bordering the Beaufort Sea. This area covers some 3,000 miles of mostly remote shoreline.

Initial recommendations found in the draft report include:

This initial look at port development in Arctic Alaska will be of interest to many of ours residents. The Alaska Deep-Draft Arctic Port System Study is available for viewing and downloading at the Army Corps website. The Corps is seeking comments on this report by February 28, 2013. They can be emailed to akregports@usace.army.mil.