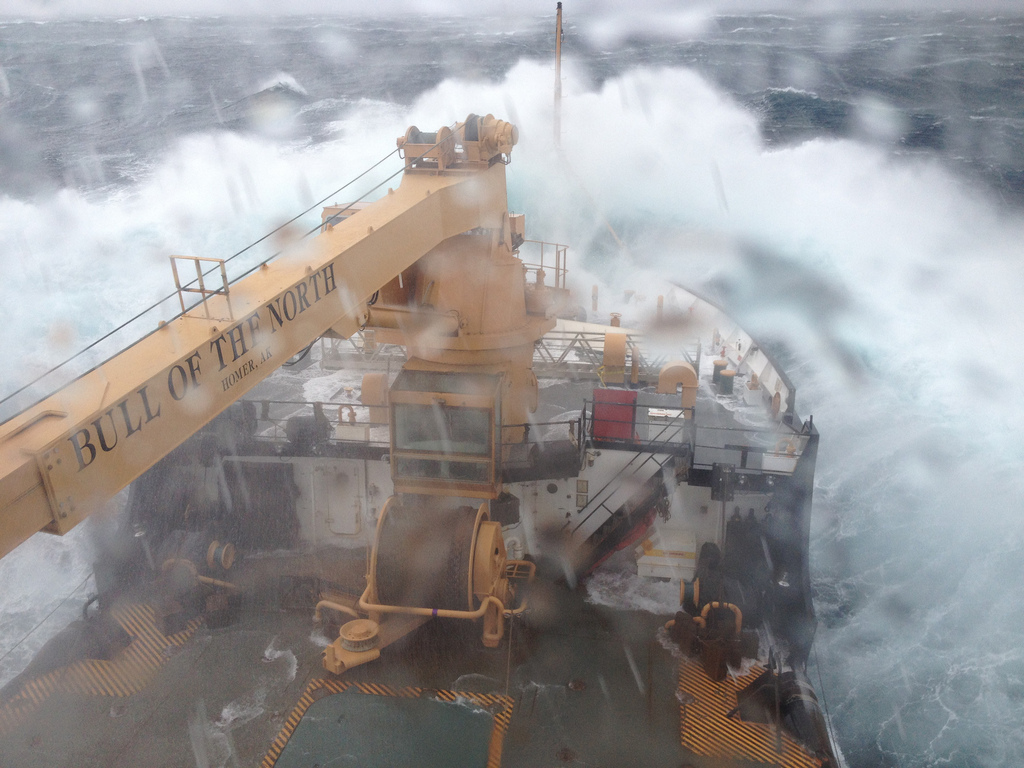 The USCG Cutter Hickory navigates heavy weather off the coast of Vancouver Island, British Columbia, March 20, 2013. The crew of the Hickory travelled along the coast of the Pacific Northwest during its return to Homer, Alaska, from a dockside period in Long Beach, Calif. USCG photo by Lt. Cmdr. Brian Krautler.

“Due to the nature of Hickory’s work, overhauling the crane was of the utmost importance to meet our mission of servicing aids to navigation throughout Western Alaska,” said Chief Warrant Officer Michael Kimberlin, the engineer officer aboard Hickory. “The crane is now more reliable and safer for our crew.”

In addition to the contracted work, the crew completed more than 30 critical maintenance projects on numerous shipboard systems, including the potable water tanks and the reverse osmosis system. An all hands effort was required to paint the entire exterior superstructure, which is vital to the long term preservation of the ship. The crew’s efforts in painting saved the Coast Guard more than $120,000 in contracted maintenance and left the ship looking better and protected from the harsh Alaskan maritime environment.

“The entire maintenance period was a resounding success,” said Lt. Cmdr. Brian Krautler, commanding officer of Hickory. “We had a contractor that was eager to perform the contracted work with great care, speed, and quality. The entire crew also worked tirelessly to complete the work with pride and I couldn’t be more proud of their efforts.”

The crew of the Hickory’s primary mission is servicing more than 170 aids to navigation throughout the region’s navigable waterways and ports, including Cook Inlet, the Shumagin Islands, Western Kodiak and the Kuskokwim River. The crew also conducts law enforcement, search and rescue, environmental response, and community outreach missions, and was deployed to the Arctic in 2012 in support of Operation Arctic Shield.

The CGC Hickory, nicknamed “The Bull of the North,” is a 225-foot, sea-going buoy tender homeported in Homer.