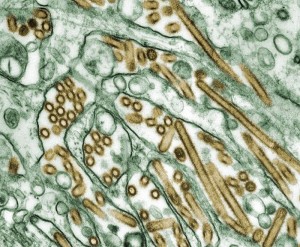 Outbreaks of a high contagious and deadly variant of the avian influenza virus have been widely reported. Known specifically as a highly pathogenic avian influenza virus of type A of subtype H5N1 (HPAI A H5N1), the public often hears this virus referred to as H5N1 flu. Avian flu surveillance interests Alaskans because of our unique geographical location. Being much closer to Asia than the lower states, many migratory bird flyways stemming from the Far East cross portions of Alaska.

Researchers from the United States Geological Survey (USGS) and other agencies have been studying and monitoring migratory birds along the Yukon-Kuskokwim Delta of western Alaska to see if the area could be a point of entry for dangerous avian pathogens. Known as the Y-K Delta, the region is a rich bird breeding ground located alongside multiple migratory bird flyways. The intermixed flyways can allow contact between birds of Asian and North American origin.

Working with the Kuskokwim Health Corporation and Kawerak Corporation, Federal agencies monitored wild migratory birds for four years. Some 24,000 samples were taken from 82 species of birds. Researchers did find less harmful versions of avian influenza that contained Eurasian genes in 90 of the samples taken. This finding supports the notion that western Alaska could be an entry point for foreign animal diseases.

In a press release, Andrew Reeves of the USGS says, “This finding supports a ‘dilution-by-distance’ idea we’ve hypothesized in other studies. Birds sampled further from Asia, such as in the lower-48 United States, very rarely contain avian influenza viruses with Eurasian genes, but in Alaska they are more common.”

The research is presented in a paper “Genomic analysis of avian influenza viruses from waterfowl in western Alaska, USA,” and has been published in the Journal of Wildlife Diseases and can be viewed online for a fee.

Evidence presented in this effort supports continuing surveillance efforts in the Y-K Delta for avian pathogens like H5N1.