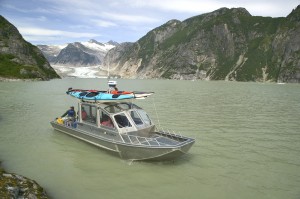 The watercourse running from the Spatsizi Plateau to the Pacific Ocean is a territory of superlatives, yet known simply as the Stikine River. Naturist John Muir’s initial trip up the river changed his life. He noted 300 glaciers along its shores. Details are in his book Travels in Alaska. Muir says of the Stikine, it’s a “Yosemite 100 miles long.” Alaskans note with some disappointment that the majority of the river lies within Canada, with the States’ portion being only 64 kilometers (40 miles) from the border.

First People – The Tlingit people of Southeast Alaska named the river Stikine for Great River. Tlingit migration lore tells of their people’s travel west looking for a new homeland. They encountered a glacier that was too great to cross. A meltwater tunnel was visible at its base and several young men volunteered to attempt a passage through the crevasse. At the last moment, a couple of elders took the trip upon themselves fearing loss of the youth to the future of the group. These elders passed safety through the glacier and found the rich land of Southeast Alaska, Lingít Aaní. The remaining people followed their elders into their new land and became the first Tlingits. Stikine Tlingit traded historically with the Tahltan living on the upper reachs of the river.

Tahltan are a tribal division of the Nahane Athapascan. Their traditional lands are drainage basin of the Stikine reaching down to the mouth of the Iskut River, Dease Lake, and parts of the Taku River. Stikine Tlingit fished up the Stikine to Telegraph Creek overlapping some of the territory utilized by the Tahltan with little apparent conflict. A same named village of Tahltan (Goon-tdarf-shaga) was built near the confluence of the Stikine and Tahltan Rivers after the Cassiar gold rush of 1874. A few Tahltan live near Telegraph Creek, British Columbia.

History – Natives have known the secrets of the Stikine for centuries, while Samuel Black of Hudson’s Bay Company first crossed the headwaters of the river in 1824. Robert Campbell was tasked by the company to improve communications between posts and visited the confluence of the Tahltan and Stikine in 1838. John Muir made his visit up the river to Glenora by steamship in 1879 and wrote about it in Travels in Alaska. People trekked up the river after finding gold near Telegraph Creek in 1861, then during the Cassiar gold discovery of 1877 and finally for the Yukon gold rush of 1898. The Stikine served as an important transportation route for prospectors in the gold rush, and building material being shipped to Watson Lake during World War II. In modern times, the river supports the transportation needs of mining industry in northern British Columbia.

Description – The raw data paints a picture of majesty. From the headwaters of the Spatsizi Plateau to the Stikine River Delta the waterway runs some 539 kilometers (335 miles) and drains at least 50,000 square kilometers (19,305 square miles) of watershed. Effectively, the Grand Canyon of the Stikine divides the river into two distinct sections, the upper and lower river. The canyon is a virally impassable stretch of water 100 kilometers (62 miles) long with walls reaching 450 meters (1,476feet) above the river surface. An estimated average of 283 cubic meters (10,000 cubic feet) of water per second funnel into this volcanic rock gap that is only 2 meters (6.5 feet) wide at its narrowest point. Rob Lesser made the first descent of the canyon in 1981. Lesser and some companions made a complete decent of the fissure in 1985. Universally the canyon ranks as one of North America’s legendary class V+ whitewater runs. Its unique geology made the canyon a target of a BC Hydro Corporation dam for a while. Below the Grand Canyon, the river is navigable for 210 kilometers (130 miles) to the delta. Wrangell, Alaska is 40 kilometers (25 miles) from the end of the Stikine.

Upper River – An extended paddling trip on the upper Stikine River begins with a floatplane trip to Tuaton Lake located in the Spatsizi Plateau Provincial Wilderness Park and covers 260 kilometers (160 miles) to the Highway 37 bridge that crosses the Stikine. The upper Stikine River is surrounded by four major parks; the Tatatui, Spatsizi Plateau, Stikine River Provincial, and Mount Edziza. Many consider the region British Columbia’s Serengeti with the rich variety of wildlife. Moose, Black and Brown bear, woodland caribou, wolves, and Stone sheep are abundant.

Lower River – Paddling on the lower Stikine begins below the Grand Canyon and reaches 210 kilometers (130 miles) to the river delta. On the way you will pass the confluence of the Iskut River and many glaciers like the Flood and Shakes. The Iskut River is the largest tributary of the Stikine. From its headwaters at Kluachon Lake, the Iskut flows 236 kilometers (145 miles) to its confluence with the Stikine River. This lower river area is important to commercial, personal use and subsistence fishermen. It is a popular recreation area with a number of private and Forest Service cabins in use. Salmon and Steelhead depend on the Stikine for spawning and rearing habitat. The Stikine River Delta is renowned for attracting vast numbers of migratory birds like geese, swans, ducks, shorebirds and eagles. The United States side of the river is within the 448,841 acre Stikine-LeConte Wilderness administered by the US Forest Service.

Guide/Outfitter – Alaska Vistas and their sister company Stickeen Wilderness Adventures offer jet boat trips to see glaciers and sights along the Stikine River, extended rafting and paddling trips, supply drop offs to Forest Service Cabins, and offers outfitting support for independent travelers. The company has operations based at the Wrangell City Dock. These companies are an excellent resource for visitors interested in getting the most out of trip to the region and enjoy my highest recommendation.