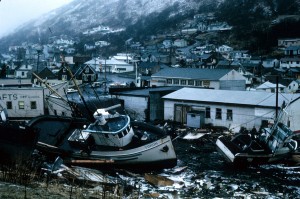 The Alaska Legislature established the Alaska Earthquake Information Center (AEIC) by statute in 1986. Home of the world’s second greatest earthquake, recorded in 1964, and the most seismically active state in the Union, Alaska has a selfish interest in monitoring earthquake activity within the state.

The Alaska Earthquake Information Center acts as a hub that receives data from hundreds of seismic sites located throughout Alaska. Additionally AEIC processes data received from the West Coast and Tsunami Warning Center in Palmer, Alaska. Staff at AEIC record the location and intensity of roughly 22,000 earthquakes each year. Data recorded by AEIC aids in making public warnings of earthquakes and is used to further research in the field. Visitors to the AEIC can view updates of recently occurring earthquakes. 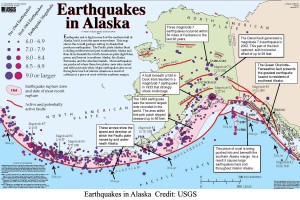 Earthquakes result from the impact of great tectonic plates spread across the earth’s surface. The plates can slide along each other or one plate can override another. Alaska is located along the northern portion of the Ring of Fire, a circularly shaped line of volcanic and earthquake activity located in the Pacific Ocean. The Alaska part of the Ring is composed of the North American Plate colliding with the Pacific Plate and the northwest movement of the Pacific Plate being subducted under the arc of the Aleutian Islands. The Aleutian Megathrust, found under the island chain, is the cause of large magnitude earthquakes in Alaska.

Many organizations joined AEIC to prepare an informational booklet on how to respond and prepare for an earthquake. Are you prepared for the next big EarthQuake in Alaska is available as a PDF download. Some suggestions include:

The Alaska Earthquake Information Center, a great resource for information on current earthquake activity, provides data on historic earthquakes, and is a rich source of practical knowledge on earthquake response and preparedness.

Google has a project in place called Public Alerts that can broadcast information on emergency events like earthquakes or tsunami to mobile devices, shows the alert information on Google Maps at the event’s location and displays emergency alerts in search results. The URL of the site is http://google.org/publicalerts.