Alaska Topographic Maps will be Updated 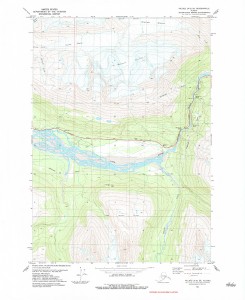 The United States Geological Survey (USGS) has announced Alaska topographic maps will be updated this year.

Topographic maps are characterized by the use of contour lines to show land relief or terrain features. Contours represent lines of equal elevation and spacing between lines is a fixed value. Closer contour lines describe steeper terrain features. Commonly used 7.5 minute topographic or topo maps are printed on a 1:24,000 scale, where one inch represents 2,000 feet on the ground. Many times these topo maps are referred to as 7.5 minute quadrangles or quads.

Quadrangle maps are labeled by the geographical area they represent and provide a suggestion to the viewer of the area’s size. A large format topographic map typically used by researchers measures an area of two degrees of longitude by one degree of latitude and is called a two degree sheet. It is printed at a scale of 1:250,000. A map of this size does not provide the detail available in smaller scale maps. A two degree sheet can be subdivided into four smaller quads covering one degree of longitude and 1/2 degree of latitude at a scale of 1:100,000.

The USGS took on the task of mapping the United States in 1879 and remains the lead civilian mapping agency in the country. Technology has marched on and historic quad maps are being replaced with new US Topo quadrangles that offer many improvements over their older cousins.

Concerning the updated maps. USGS Project Manager Bob Davis says, “The newly redesigned US Topo maps are visually appealing, especially with the addition of the shaded relief layer. The addition of shaded relief and other design components demonstrate our commitment to improving the product to meet our users’ needs.”

US Topo quads are freely available for download at the USGS. The digital quads include geospatial extensions of geographic data layers for things like orthoimagery, names, hydrography and contours that are found in the National Map dataset. The maps can be viewed with any device that supports Adobe Reader or another PDF viewing program.

Alaska’s maps are scheduled for updates and publication later in 2013. With revisions scheduled every three years, topo maps for the Great Land should be more accurate and accessible going into the future.