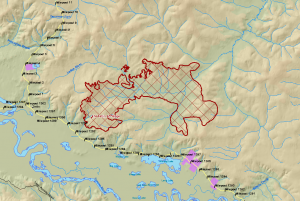 Tim Whitesell, a firefighter for the Alaska Division of Forestry has posted a video of an Alaska wildfire tornado or firenado on YouTube. An example of extreme fire behavior, footage of the phenomenon highlights the high temperatures and severe wildfires being seen across Alaska this season.

Fire tornadoes or fire whirls are generated by rapidly rising air that has been superheated by a wildfire near the earth’s surface and given sufficient spin from the surrounding atmosphere. They form much like a dust devil, composed of fire and not dust. This behavior is a sign of an unstable atmosphere.

Tim Whitesell says of this video, “This footage was taken on August 16, 2013, on the Tetlin Junction Ridge Fire burning in the Tok area. The Alaska Division of Forestry firefighter that captured the footage has never seen anything like it in his 20 years of firefighting. It is the kind of fire behavior you hear about but can’t really believe. “A picture probably is worth a thousand words, but there are indeed times when a picture just doesn’t do it justice. I’ve never seen anything like it until now.”