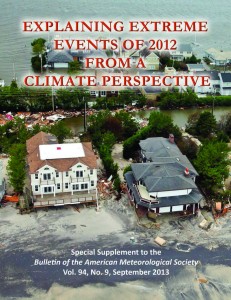 The American Meteorological Society (AMS) has published a recap explaining extreme weather events during 2012 and an explanation for them based on a climate perspective. Explaining the cause of severe weather occurrences is a challenge, especially in the world climate change politics. The AMS has brought together 19 analyses, from 18 different research groups, to look at 12 different extreme weather events that occurred in 2012. Scientists from the National Oceanic and Atmospheric Administration (NOAA) served as editors for the project.

The AMS report illustrates normal fluctuations in weather and climate played a significant role in the 2012 extreme weather events. There was some evidence shown however that human influences contributed to these events.

Among the analyses presented, half of them found some evidence that human activities contributed to the event being studied. One focus area in the paper addresses record low levels of ice in the Arctic. One group, Guemas et al., attempted to discriminate the cause of a historic low sea ice extent recorded in September 18, 2012. The analysis looked at the interactions of Arctic sea ice memory, extreme storms and warm weather conditions. Of the factors addressed, warmer than usual weather and sea ice memory were seen as equally causing the ice extent minimum.

A second analysis done by Rong Zhang and Thomas Knutson looked at the role climate change had on the same low ice extent of 2012. These two found that the low ice extent event could not be attributed to climate variability alone. The sea ice extent is forecast to continue into the future and the Arctic is expected to ice free at times by mid-century.

Other extreme weather events covered in the 2012 recap include heat and drought in the United States, Hurricane Sandy inundation levels and global rainfall events. The report, Explaining Extreme Events of 2012 from a Climate Perspective, is available online at the American Meteorological Society website.