USGS is Closing its Map Store in Anchorage 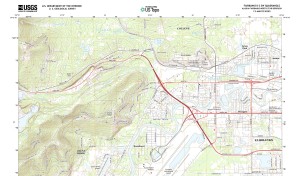 In a sign of the digital times, the USGS is closing its Map Store in Anchorage. The move announced by the Agency on May 28, 2014 is partly related to an administration directive to reduce costs and mainly the result of most USGS map products being made available for free download online.

The store located at Alaska Pacific University will remain open until October 31, 2014. Alaska Geographic will continue its sales of popular USGS maps at its 241 North C Street location in Anchorage.

Digital versions of USGS topographic maps do have significant advantages over paper products. The Agency announced late in 2013 that some 400 new topographic maps for the state of Alaska would be made available. These new maps reflect an initiative by the USGS to update foundational data for the state and replace maps that have been in use for 50 years.

While paper maps will not be sold directly by the USGS anymore, ultimately the agency will be providing more than 11,000 new maps of Alaska. They will replace the historic 1:63,360 scale maps with a1:25,000 scale digital PDF format (GeoPDF©).

Use of paper topographic maps and compasses for land navigation has largely fallen to handheld GPS devices. Modern GPS receivers are extremely accurate and easy to use. Outdoor enthusiasts would be prudent to remember a paper map and compass will work without a battery.