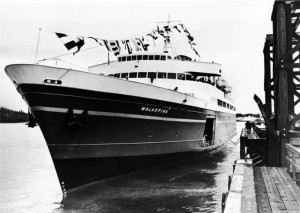 Alaska Marine Highway System (AMHS) is marking its 50th anniversary in 2013 with many special events to occur during the year. Founded in 1963, the AMHS grew out of the efforts of two Haines residents to provide marine transportation for the state. Steve Homer and Ray Gelotte converted a used LCT-Mark VI landing craft into a ferry in 1948, christened it the Chilkat and started the Alaska Marine Highway.

The Alaska territorial government purchased the Haines based business, changed its name slightly and added the ferries Malaspina, Taku and Matanuska to the system. Service was expanded south to the communities of Sitka, Petersburg, Wrangell, Ketchikan and Prince Rupert, British Columbia. Adding the port of Prince Rupert allowed residents to access the highway system leading to the lower states. Service was extended to Seattle, Washington in 1967.

The maiden voyage of the MV Malaspina arrived in Ketchikan on January 24, 1963. Newspaper accounts of the landing highlight community enthusiasm for the service. Some 3,000 residents lined up at the rainy city’s terminal to see the new vessel. Governor William Egan was aboard the ferry on its first trip and attended a ribbon cutting ceremony that included members of the National Guard, Alaska Native Brotherhood and Pioneers of Alaska. More than 4,500 people greeted the Malaspina when it arrived in Juneau a day later. Canadians were no less excited when the ferry landed for the first time in Prince Rupert, British Columbia on January 31st.

Now the AMHS fleet consists of 11 vessels that call on 32 different communities, moving an average of 312,000 passengers and 98,000 vehicles every year. Many of these rural communities have no roads to the mainland and the ferries offer important access to the outside world.

The AMHS is offering a number of different contests and sailings celebrating their 50th anniversary. Every month, the system is awarding a golden ticket good for $500 towards travel on their ferries. Entry for a golden ticket can be made online. Another system contest is soliciting stories from AMHS employees for their favorite ferry related tale. These stories will be complied and published on the www.ferryalaska.com website.

As part of the celebration, a special sailing of the MV Malaspina is being planned that will recreate the first sailing of the vessel that occurred in 1963. The voyage will entail special events in six communities in Southeast Alaska. Other celebratory sailings will be launched out of Juneau and Ketchikan throughout the summer. Details should be available soon.

The Alaska Marine Highway System in a remarkable way for visitors to see the Great Land and serves as a vital transportation link for Alaskan communities. Join the locals and see Alaska on the 50th anniversary of its ferry system.