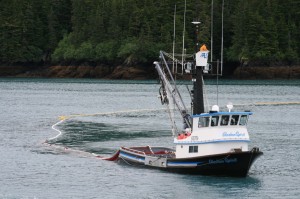 Causes of the Valdez Silver salmon run failure that occurred in 2014 are being examined by the local fish hatchery.

Hatchery management with the Valdez Fisheries Development Association (VFDA), a private non-profit salmon hatchery in Prince William Sound, have been investigating the weak return of Coho or Silver salmon to the region that occurred last year. It marks the second poor return to Port Valdez in the last three consecutive years.

It takes three years for a Silver salmon to mature and return to where it was hatched. Fish reared for the 2014 return were spawned in 2011. Fish hatchery managers refer to this as the Brood Year or BY11 in the case of these salmon. Anglers in Valdez will remember that Silver fishing was great in 2013. Based on measured returns, 13 percent of salmon smolt released by the hatchery survived to later return to the Port that year. Only one percent of the fish released from BY11 returned in 2014.

A review of the historic record shows that the release weight of the Silver salmon smolt for BY11 was only 13.50 grams. Typically the hatchery tries to release fish that are at least 18 to 20 grams. Looking at the historic marine survival rates for the lowest release weights recorded by the hatchery shows that there could be some relationship between low weight and overall survival. That by itself does not necessarily dictate a low return as there are many other factors experienced by salmon after release from the hatchery.

A closer look at the BY11 age class shows they struggled through their initial rearing period. Mortality of the smolt was higher than average. Issues like water temperature and quality greatly affect the rearing of juvenile salmon. There are also unknown factors such as feed availability and predation that can lower the marine survival of salmon while out to sea. Hatchery managers believe combining low smolt weights with a stressful rearing environment may have played into the poor return experienced in 2014.

The VFDA covers most of the costs associated with producing the salmon for the well-known Valdez Silver salmon sport fishery with cost recovery revenue from the sale of Pink salmon. VFDA also receives program funding from the City of Valdez. As a private, non-profit hatchery, its Board feels it is important to provide this benefit to the community and region. Efforts are underway to secure funding sources to improve rearing conditions at the hatchery. These will include projects to improve freshwater quality, adding a seawater treatment system, improving fish rearing raceways and adding additional
saltwater rearing pens.

A viable Silver salmon sport fishery is seen by the VFDA as a significant economic driver for the community. The hatchery will carry on with its efforts to improve the run for the enjoyment and use by fishermen. Efforts will continue to work with industry and governmental partners to ensure the sustainability of this fishery for years to come.