A Woman who went to Alaska: Travels of May Kellogg Sullivan in the Klondike and Arctic 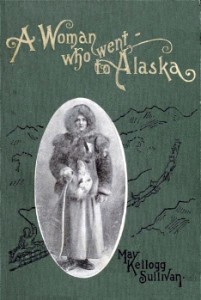 A Woman who went to Alaska details two astonishing trips made by May Kellogg Sullivan to the goldfields of the Yukon and Alaska Territories. A true survivor, Sullivan stakes mining claims, works at menial jobs and experiences life with native people of the region. The very presence of women in the North during this era was extraordinary.

May Kellogg Sullivan’s first trip to Alaska begins an odyssey that will lead her from the docks of Seattle to those of Skagway and on to Dawson in the summer of 1899. Mary’s father preceded her to the Klondike Goldfields by a year and is shocked by his daughter’s unannounced arrival to his camp in the Yukon. Sullivan travels on to Dutch Harbor/Unalaska and lands in Nome on Norton Sound. May speaks of Nome, “Crowded dirty, disorderly, full of saloons and gambling houses, with a few fourth-class restaurants and one or two mediocre hotels, we found the new mining camp a typical one in every respect. Prices were sky high. One even paid for a drink of water….”

A reader interested in the gold rush of 1897 to 1900 will enjoy Sullivan’s rich imagery of strikes on Eldorado, Hunker and Bonanza Creeks, with Stampeders clawing their way to the Klondike, lingering for only a while and ultimately drifting along the Yukon River to the golden beaches of Nome. Travel on the thousand miles Yukon River is a story in of itself with passage through Forty Mile Camp, Eagle City and Circle City, crossing the Yukon Flats to Fort Yukon, and entering the Bering Sea to St. Michael. Any hiker of the Chilkoot Trail will enjoy her descriptions of travel on the White Pass and Yukon Route Railroad to Lake Bennett, British Columbia.

Ms. Sullivan tells her readers in the preface of the book, “In answer to the oft-repeated question of why I went to Alaska I can only give the same reply that so many others give: I wanted to go in search of my fortune which had been successfully eluding my grasp for a good many years. Neither home nor children claimed my attention. No good reason, I thought, stood in the way of my going to Alaska; for my husband, traveling constantly at his work had long ago allowed me carte blanche as to my inclinations and movements. To be sure, there was no money in the bank upon which to draw, and an account with certain friends whose kindness and generosity cannot be forgotten, was opened up to pay passage money; but so far neither they nor I have regretted making the venture.”

A Woman who went to Alaska is available as a free download as a Project Gutenberg book through manybooks.net. James H. Earle and Company of Boston first published the 95,418-word book on the gold rush era in 1902.