Hazelet’s Journal – Tales of the Alaska Gold Rush of 1898 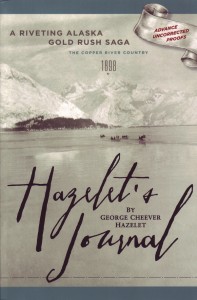 The Alaska gold rush that started in 1897 holds an allure for those interested in this colorful period of American history. While many are familiar with stories of Skagway, Dyea and the Chilkoot Pass, the Yukon gold fields weren’t the only targets of erstwhile prospectors. Prince William Sound and the Copper River region drew their share of these early explorers.

Any visitor to Valdez, Alaska will eventually notice the names of Meals and Hazelet on city street signs. A stop at the local museum immediately highlights the influence George Hazelet and Andrew Meals had on the development of this Prince William Sound community. Partners Hazelet and Meals took part in an undertaking few can dream of today.

John Clark, a great-grandson of George and Hattie Hazelet, has composed a book on the gold rush of the Copper River region. Clark uses George Hazelet’s journals of his adventures in Alaska, along with period photographs and references to tell a compelling story of extreme hardship and even greater rewards.

George Hazelet left his Midwestern home on February 17, 1898 for the Alaska gold fields. Taking the train to Seattle, Hazelet had time after his arrival to consider the options. Many Stampeders were heading for the Yukon and the less taken route to Alaska’s Copper River country seemed to offer better prospects. After putting together their grubstake, partners Hazelet and Meals left Seattle on the Excelsior on February 27th.

Hazelet’s journal entries describe the uncomfortable, dangerous voyage to Valdez and movement of their goods off the Excelsior onto the ice that constituted the community wharf. Access to the gold fields was over the Valdez Glacier. The thought of moving a mining grubstake over its ice and crevasses is unbelievable to us today.

George Hazelet and his company took part in a myriad of exploits in their next four years of exploration. They built riverboats, hunted caribou, prospected on numerous rivers, experienced northern winters, established a mining company, fought claim jumpers, took part in a military expedition, developed a town site and suffered crushing defeats. It was a lifetime of experience crammed into a remarkably short period of time.

A description of Mount Drum in the Wrangell Mountains emphasizes Hazelet’s explorations of the region,

It would take the brush of an artist to properly paint this picture. If the snow and ice mass and bushes could be transformed into fire one could readily imagine that he was in the infernal regions. All that is necessary is to put fire there and have the perfect hell. Drum, at some remote period in her history has had her whole side blown out and has vomited forth for years, that which she could not hold down, on to this old time glacier, the glacier in turn has taken up the material and transported if far down the Nitona towards the Copper. Millions of tons of rock, clearly showing a high degree of heat, are strewn all over the small valley. The scene is one of almost unsurpassed grandeur. What a sight it would have been to have beheld Drum when she was belching forth all this material.

Clark’s text is divided into three sections detailing Hazelet’s experiences from February of 1898 to August of 1902. The book also includes a copy of A Guide for Alaska Miners, Settlers and Tourists, published by the Meals and Hazelet Copper River Mining, Trading and Development Company,  numerous period photographs, a chronology from 1790 to 2012, and a narrative of life after the gold rush.  This extensive compilation of material and pioneer writing style make John Clark’s book a superb read for those interested in this era.

Hazelet’s Journal [ISBN 978-1-938462-00-9] by George Cheever Hazelet, with the work of Douglas Keeney and John Clark is a hard cover book published by the Old Stone Press of Louisville, Kentucky and retails for $29.95.