Sharing Our Pathways: Native Perspectives on Education in Alaska 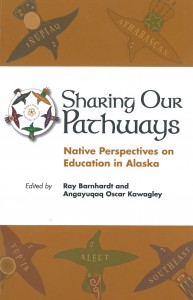 In early 2011, the Alaska Native Knowledge Network published a collection of essays derived from articles first published by the Alaska Rural Systemic Initiative’s (AKRSI) newsletter publication Sharing Our Pathways. The primary purpose of AKRSI was to systematically document native ways of knowing, the indigenous knowledge systems used by Alaska Native people and use this information to develop curricula to be taught in Alaska’s schools.

Sharing Our Pathways: Native Perspectives on Education in Alaska was edited by Ray Barnhardt and Angayuqaq Oscar Kawagley. Dr. Barnhardt is Director of the University of Alaska Fairbanks Cultural Studies Department. The late Dr. Kawagley, who passed this April, conceived the notion of using indigenous methodology to teach students in our schools. Kawagley and Barnhardt worked closely together for many years to foster the use of cultural and curriculum resources developed by AKRSI.

Articles found in Sharing Our Pathways span some 12 years of contributions made by Alaska Native educators and Elders from across the entire state. Initiatives described in many of these articles went on to be adopted in the Alaska Standards for Culturally Responsive Schools and state regulations.

Sharing Our Pathways is broken into five pathways to education that each represents values held by the Athabascan, Iñupiaq, Tlingit/Haida, Unangan/Alutiiq and Yup’ik/Cup’ik peoples.

One illustration is expressed by Angayuqaq Oscar Kawagley is in a 1996 article written titled Earth, Air, Fire, Water and Spirit as a Foundation for Education. Kawagley says,

“The modern schools are not teaching students how to live a life that feels right. Rather, the schools are giving a lot of information to the students without also showing them how they can transfer the information into useful knowledge for making a living…many machines, modern tools and the vaunted computers are not enough to teach a lifeway that feels right. It is more important that we use the Yupiaq values and culture well interspersed with imagination and intuition from within and the element spirit to make the new lifeway that feels right.”

Sharing Our Pathways: Native Perspectives on Education in Alaska