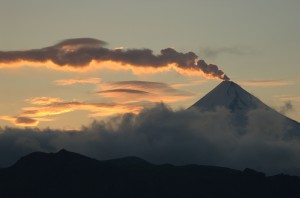 The U.S. Fish and Wildlife Service rejected a land exchange proposed to establish a road corridor through the Izembek National Wildlife Refuge. This decision was contained in the final Environmental Impact Statement (EIS) that evaluated the proposed road system. A land exchange needed to move the Izembek Refuge  access road project forward will not be supported by the agency.

In the 1990s, the Aleutians East Borough explored the concept of connecting the communities of King Cove and Cold Bay with a road. The proposed road would need to pass through the Izembek Refuge that is a designated wilderness area. Congress approved funds for a road alternative that involved upgrades to medical facilities, airport improvements and use of a hovercraft to link the two towns. While the hovercraft proved to be capable, its cost and reliability was an issue for the borough and it ceased operations of the service.

Proponents of the road proposed a land exchange that would grow the size of the refuge and add habitat to be placed under its protection. In its final EIS, the Fish and Wildlife Service stated road construction would harmfully bisect the refuge.

Concerning this decision, Interior Secretary Ken Salazar said, “The landscape that Congress designated as wilderness and that serves as vital habitat for grizzly bear, caribou and salmon, shorebirds and waterfowl – including 98 percent of the world’s population of Pacific black brant. After extensive dialogue and exhaustive scientific evaluation, the agency has identified a preferred path forward that will ensure this extraordinary refuge and its wilderness are conserved and protected for future generations.”

It’s not a surprise that many in Alaska do not agree with the actions of the agency. Alaska’s senior Senator Lisa Murkowski condemned the decision that blocks community access to airports that are needed during medical emergencies. Alaska’s only Representative Don Young called the determination shameful, saying “These Alaskans simply want limited road access to an all-weather airport, something many in Alaska and nearly all Americans in the Lower 48 take for granted. Simply put, today’s decision is shameful, and I am horrified that the federal government would turn its back on the health and safety of its residents.

The public is allowed to comment on the EIS for 30 days after release of the final draft. Comments will be part of the agency’s record of decision.