All About 550 Paracord (Parachute Cord) 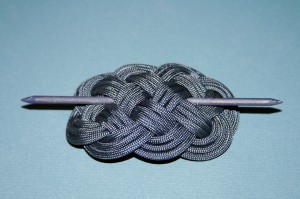 Parachute cord or 550 paracord was originally developed for use as parachute suspension or shroud lines. This nylon line utilizes kernmantel construction, having an interwoven outer sheath that contains a core of several individual yarns. Being made of nylon, the line is smooth, flexible and elastic. During World War II, use of parachute cord spread rapidly from paratroopers to all members of the military that needed lightweight cordage. Veterans brought use of paracord home and its popularity spread within the civilian population.

550 paracord derives its name from the cord’s 550 pound (249 kilograms) minimum breaking strength. Most 550 paracord is advertised as meeting military specification MIL-C-5040H. Under this specification, the cord is roughly 5/32 inches (4 millimeter) in diameter, has seven to nine core yards, a minimum elongation of 30 percent, a sheath made up of 32 or 36 woven fiber strands and a minimum length per pound of 225 feet (5.62 grams per meter).

Paracord has multiple uses for outdoor enthusiasts. It is used to secure pack loads, as tent guy lines, to craft survival shelters, in lashing timbers or as laces. Using various knots or braids, paracord is used to craft items like survival bracelets, gear lanyards, dog leashes, belts, rifle slings and more. Used with a snap, carabineer or quick link, paracord lanyards are a great way to hang onto a knife or compass. The cord is ideal for use in survival and marine damage control kits.

Paracord is very useful in many emergency and survival situations. It does not rot and can be used when wet. By wearing a paracord survival bracelet, a person can carry approximately eight to ten feet of cord at all times. Many survival bracelets are tied so that if their center lines are removed, they can easily be unraveled for emergency use. It is always a good idea to keep a hank of paracord in the glove box or rucksack.

Paracord can be used as it is received from the manufacturer or its core can be removed. The outer sheath is flatter without the inner core and more flexible. Many use the outer sheath as bootlaces. The inner yards can be used individually to whip the ends of laid line to prevent fraying or as a survival fishing line.

Commercial paracord manufacturers offer numerous and often bright color options, that include cord that glows in the dark or have reflective tracers woven into the sheath. Paracord is available in almost every imaginable camouflage color scheme. Cord is sold in lengths varying from 25 foot bundles to 1,000 foot spools.

Handcrafters have found that it is useful to preshrink paracord in hot water prior to use. Paracord ends are typically melted to prevent fraying. It is best to store the cord only after it is dry and avoid prolonged exposure to direct sunlight. Nylon will degrade from UV radiation.

Information About Alaska offers a number of handcrafted paracord gear items for sale. View gear at the IAA Online Store.