Chilkoot Trail to the Klondike: 1898 Gold Rush Route from Dyea to Lake Bennett via Chilkoot Pass 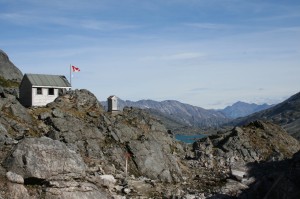 Alaska’s Panhandle is a rocky, narrow strip of land closely abutting British Columbia, running some 644 kilometers (400 miles) from Ketchikan to the upper end of the Inside Passage at Skagway. During the Klondike Gold Rush of 1898, Steamships carried thousands of prospectors through Inside Passage from Seattle to jam the docks of Skagway and Dyea. Access to the Yukon River and ultimately Dawson City came via the Chilkoot Trail, passing through the Chilkoot Pass at 1,140 meters (3,739 feet) above Dyea.

In its heyday, Dyea proclaimed itself like many other towns yet to come as the largest city in Alaska. Stampeders crossed Chilkoot Pass with their ton of goods in the effort to strike it rich in the Klondike goldfields starting in 1898. Thousands now come to hike the 53 kilometers (33 miles) through history to Lake Bennett each year. Those interested paddling from Lake Bennett to Dawson City on the Yukon River should read Jennifer Voss’s Klondike Trail.

Dyea – Little remains of this gold rush boomtown of 10,000 souls located at the delta of the Taiya River. Once the White Pass & Yukon Route (WP&YR) Railroad was completed, the town was dismantled and shifted towards Skagway. The Chilkoot Trailhead is 500 meters (1,640 feet) from the campground in Dyea. It is 12.5 kilometers (7.5 miles) from the trailhead passing through Finnegan’s Point to Canyon City

Canyon City – The U.S. National Park Service (NPS) campground at Canyon City is the first approved camping site on the trail. A side trail provides access to the old Canyon City town site were many relics of the gold rush remain in view. From Canyon City, hikers will pass through Pleasant Camp and travel a total of 8.4 kilometers (5.2 miles) to Sheep Camp.

Sheep Camp – A large campground is found at Sheep Camp that can handle 80 people. Most travelers on the Chilkoot Trail spend the night at Sheep Camp since it takes a good day of effort to make it from here 12.1 kilometers (7.5 miles) over the pass to Happy Camp in Canada. At its peak of use, 7,000 stampeders could be found around Sheep Camp. Two key historic landmarks are encountered enroute to the summit, the Scales and Golden Stairs. The Golden Staircase is the classic picture representative of the Yukon Gold Rush. If you look at the current State of Alaska vehicle license plate, the Golden Stairs will easily be seen at its center.

Summit – Most gold seeks climbed to the summit some 20 to 40 times to move their ton of goods as required of the North West Mounted Police for entry into Canada. Mounties feared winter starvation and required these supplies accompany each prospective miner. A typical outfit contained 350 pounds of flour, 150 pounds of bacon, 100 pounds of beans and sugar purchased at a cost of $250 to $500 USD. Hikers coming from Sheep Camp will gain 800 meters (2,625 feet) in elevation within the 6 kilometers (3.7 miles) leading to the summit.

Happy Camp – Once you have crossed Chilkoot Pass, the trail dips down towards Crater Lake. The climate is much different, drier than the temperate rain forest found at the beginning of the trail in Dyea. Travelers will pass Stone Crib, the once terminus of the Chilkoot Railroad and Transport Company tramway that shipped goods to Lindeman. WP&YR purchased and eliminated the competing service in 1900. It is 10.4 kilometers (6.5 miles) to Lindeman.

Lindeman – It is 8.8 kilometers (5.5 miles) from Happy Camp to the campground at Lindeman. Parks Canada operates a interpretive center worth visiting at the camp. Many of the boats built for the gold rush originated here, the rapids between Lakes Lindeman and Bennett limited the popularity of this option. The trail passes Bare Loon Lake, which provides the chance for a very invigorating trailside swim. Just past Bare Loon Lake is the cut-off trail to Log Cabin.

Bennett – Prospectors crossed 161 kilometers (100 miles) of lakes leading from Lake Bennett to the Yukon River near the town of Whitehorse. WP&YR maintains a train station at Bennett offering transportation service for hikers to Skagway. Bennett was a prosperous town that went on successfully for a while after the gold rush. Once the railroad reached Whitehorse and that town developed, Bennett faded from the scene.

Plan a hiking trip on the Chilkoot Trail well in advance. The U.S. National Park Service and Parks Canada require permits to travel the trail. Care needs be taken in arranging transportation, both to Skagway and off the end of the trail.