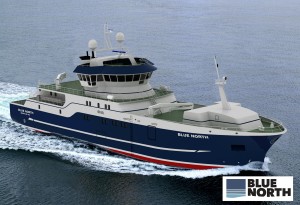 Blue North Fisheries is company operating a fleet of head and gut freezer longliners in the Gulf of Mexico and Bering Sea. The company harvests and processes Pacific Cod, Black Cod or Sablefish, Alaska Pollock and Turbot with these vessels using hook and line equipment. Recenty, Blue North announced a new build program for a sustainable fishing boat specifically developed for the Alaska cod hook-and-line fishery.

This “green” vessel will be built by Dakota Creek Industries in Anacortes, Washington and is designed by the Norwegian ship design firm Skipsteknisk AS. Construction is slated to be finished in late 2013.

“One of our main objectives in designing and building this vessel is making absolutely certain that we move forward in a way that is environmentally sensitive and thoughtful,” says Patrick Burns, Vice President at Blue North. “We recognize, accept and embrace our responsibility as stewards of sustainability in everything we do at Blue North.”

Hook and line fisheries are seen as being more sustainable, targeting species better than methods like mid-water trawls. Bycatch is a term used to describe the capture of untargeted fish species. It turns out that longlining is a fairly conservative fishing method in regards to preventing bycatch.

Known as longline or longliners, these vessels focus on maintaining the quality of fish captured. Since each fish is handled individually as it is brought aboard, non-target species can be released unharmed by the fisherman. Compared to floating nets, very little longline gear is lost each year and it does not keep fishing like the ghost nets seen in the North Pacific.

The naval architecture firm of Skipsteknisk AS is designing this vessel. Skipsteknisk AS was established during 1976 in the Norwegian town of Aalesund. The Aalessund region is known for its shipbuilding and innovative ship designs. Designated by the firm as ST-155L, the vessel will be 191 feet (58.4 meters) in length and 42 feet (12.8 meters) in breadth. The new build will use diesel electric propulsion, driven by two Caterpillar diesel generators, providing 910 eKW each. These generators feed two AC asynchronous 750 KW motors that power two Scottel azimuthing twin propeller thrusters.

The vessel’s molded hull design and propulsion will produce fewer emissions and save at least 30 percent in fuel consumed. Its diesel electric twin-bladed dual-azimuth propulsion system will allow the boat to be the first commercial fishing vessel in the United States to be certified under the EPA Tier III emission standards.

Helge Slagnes, Chief Designer of Fishing Vessels at Skipsteknisk AS states, “Blue North has adopted innovations developed in Norway, made meaningful improvements, and is now taking them to a positive new level halfway around the world.

Blue North will be processing boneless cod fillets and other consumer-ready cod products aboard. Processing the fish immediately after it’s caught ensures product quality. The Alaska hook and line cod fishery has been certified as sustainable by the Marine Stewardship Council (MSC). The Monterey Bay Aquarium Seafood Watch Program has labeled this fishery as a “Best Choice”.

It is encouraging to see new, innovative fishing vessels being purpose built for Alaska fisheries. Blue North is making an investment in its future, as well as our state.