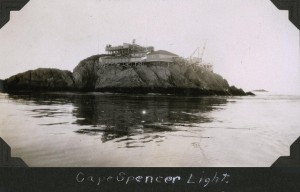 Historic Cape Spencer Light is located on Cape Spencer at the entrance of Cross Sound and Icy Strait from the outside waters of the Gulf of Alaska. It is found inside the boundaries of Glacier Bay National Park. Cross Sound marks the northern exit for vessels traveling along the Inside Passage of Southeast Alaska. The maritime industry supported the installation of a light at Cape Spencer and requests for its construction started in 1906.

The Secretary of Commerce William C. Redfield, in an annual report to the President of the United States, mentions funding for construction of a lighthouse at Cape Spencer. The Secretary asked for $145,000 to establish a light and fog-signal station at or near Cape Spencer, Alaska in 1918.

“Cape Spencer is at the entrance to Cross Sound and Icy Strait, through which pass all vessels running from Puget Sound ports to Prince William Sound, Seward, Cook Inlet, and Kodiak, excepting only occasional freighters proceeding by the outside route. With the construction of the proposed Alaskan railroad the traffic by way of the Cape Spencer will be materially increased. A small unwatched light is now maintained on the cape, but it is believed that a large watched light and fog signal should be provided, especially for vessels returning from the westward, to be used as a landfall, as it is important that they be given all possible assistance, especially in thick weather. Maritime interests have urged the establishment of this aid.”

Thomas Riggs, Jr., the Territorial Governor of Alaska in a report to Secretary of Interior John Barton Payne in September of 1920 addresses his concerns over establishment of a light at Cape Spencer.

“I particularly wish to draw attention to the need of improved lights with added fog signals at Cape Spencer, Cape Hitchinbrook, Point Retreat. These points have long been dreaded by mariners and should have proper lights and signals. Particularly at Cape Spencer is a high-powered light and strong siren needed. Cape Spencer marks the opening from the Gulf of Alaska into Cross Sound and the inside passage, a route used by practically all vessels sailing to southwestern Alaska. Fogs and storms are here very prevalent and unless the cape can be seen a steamer must lie outside until clearing weather permits an entrance. At many other points along the coast a master can determine his position from soundings, but at Cross Sound, there is no regularity of bottom, rendering this mode of reckoning ineffective.”

Congress finally authorized the lighthouse in May of 1924 and the project was completed in December of 1925. This remote station was equipped with a 500,000 candlepower light using a third order fresnel lens atop a 25-foot tower. The light could be seen for many miles. New optics, a solar powered VRB-25 Vega lens was installed in 1998 and the original fresnel optics are now displayed at the Alaska State Museum. A radio navigation beacon was installed at Cape Spencer in 1926, making it the first such installation in Alaska. Vessel could pick up its signal from 200 miles out to sea.

The lighthouse at Cape Spencer is one of the most isolated facilities operated within the state. Until the lighthouse was automated in 1974, a crew of four Coast Guard personnel served it. An initial tour of duty was a year long and the steep slopes of the lighthouse site make approach by boat treacherous.

Cape Spencer Light is still operational and an important aid to navigation for mariners in Alaska. It is still administered by the Coast Guard and was placed on the National Register of Historic Places (75002160) in 1975. The facility is not open to the public.