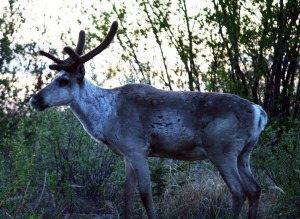 In the spirit of the season, the Alaska Department of Fish and Game (ADF&G) has published a detailed species profile for Santa’s flying reindeer. Heard, but seldom seen, this rare animal is popular with children across the world.

In a press release, ADF&G says, “Santa’s reindeer (Rangifer tarandus saintnicolas magicalus) look very similar to common reindeer or caribou, but have many characteristics—including the ability to fly—that distinguish them from the seven other common subspecies. In Europe, caribou are called reindeer, but in Alaska and Canada only the semi-domesticated form is called reindeer. All caribou and reindeer throughout the world are considered to be the same species, and, including Santa’s reindeer, there are eight subspecies. Alaska has mostly the barren-ground subspecies and one small herd of woodland caribou.”

The species profile for Santa’s reindeer is available on the ADF&G website at www.adfg.alaska.gov/index.cfm?adfg=santasreindeer.main This profile includes a complete species description, audio recordings, drawing of reindeer sign, research information, helpful hints for serving reindeer snacks and making observations, and additional resources about caribou in Alaska.