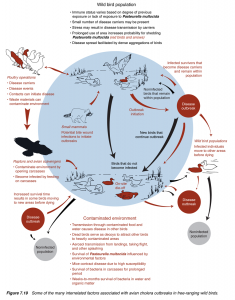 Avian cholera is a very contagious bacterial disease that can spread quickly among seabirds. It can cause massive die-offs of infected birds, bird deaths can happen so suddenly that birds have been observed literally falling out of the sky. The Alaska Department of Fish and Game reported on December 4, 20013, that a unusual number of seabirds had been killed by Avian cholera on St Lawrence Island, Alaska.

Authorities were able to quickly identify the outbreak due to the prompt actions of residents of Savoonga and Gambell who reported sick birds beginning on November 20, 2013. Dead birds were shipped to the U.S. Geological Service National Wildlife Health Center in Madison, Wisconsin for the diagnosis.

In a press release, Wildlife Veterinarian Dr. Kimberlee Beckmen says, “Strains of the avian cholera bacteria are adapted to infect birds are not generally a high risk for infection for people. However, it is always advisable to cook meat thoroughly and never eat sick birds or animals that may have died from a disease. Anyone touching a sick animal should wear gloves and wash hands with soap and water after handling animals or butchering meat.”

The bacteria can easily pass from bird to bird. Its spread to humans has been reported through animal bites or scratches. Outbreaks are minimized by prompt removal of dead birds. This option is not viable for a remote location like St. Lawrence Island and the State of Alaska has proposed some alternatives for dealing with the infested birds.

The Alaska Department of Fish and Game encourages people to report sick or dead bird to one of the local offices or email their veterinarian at dfg.dwc.vet@alaska.gov.