Kake Cannery in Alaska Listed as an Endangered Historic Place 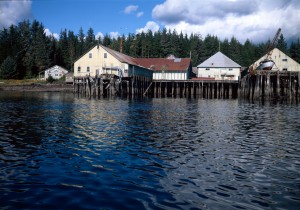 The National Trust for Historic Preservation announced its list of America’s eleven most endangered historic places and the Kake Cannery in Alaska was included in the list. This list is published by the Trust to spotlight important examples of our national heritage that are at risk of destruction.

Kake Cannery held a significant role in Alaska’s early development of the salmon fishing industry. The site contains more than twelve building constructed between 1912 and 1940, with many of them built out over the water on wooden pilings. Using migrant labor from China, Japan and the Philippines, the cannery became part of the largest industry in Alaska during the first part of the twentieth century.  Located about a mile and a half south of the Kake, Alaska town site, the facility was declared a National Historic Landmark in 1997.

In a press release, Trust President Stephanie Meeks says, “For more than a quarter century, our list of America’s 11 Most Endangered Historic Places has called attention to threatened one-of-a-kind treasures throughout the nation and has galvanized local preservationists to help save them. From Gay Head Lighthouse on Martha’s Vineyard to Kake Cannery in Alaska, to the beloved one and two-room schoolhouses of Montana, this year’s list reflects the diversity of America, its historic places, and the variety of threats they face. As it has over the past 26 years, we hope this year’s list inspires people to speak out for the important places in their own communities that help to define our nation’s past – and enrich its future.”

The 2013 list of America’s 11 Most Endangered Historic Places (in alphabetical order):

Over the years, the National Trust for Historic Preservation has identified more than 240 architectural, cultural or natural heritage sites that are at risk of destruction or damage. The Trust notes that only a handful of sites have been lost after being listed.