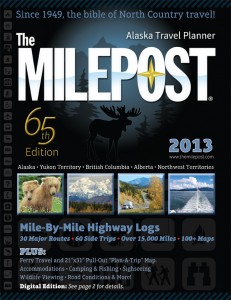 In Alaska, directions are commonly given in terms of a milepost, as in turn right at mile 10 Richardson Highway or my house is at 3.5 mile Zimovia Highway. It can take newcomers a while to adjust to a land without obvious street numbers. The Milepost 2013 is a publication synonymous with travel in the North and it’s arranged by mileposts with its detailed mile-by-mile logs for each major highway in Alaska, Alberta, British Columbia, Northwest Territories and Yukon Territory. This 65th edition of the valuable travel guide provides visitors and locals alike with descriptions of 30 major routes, detailing some 15,000 miles of highways and comes with a hundred detailed maps.

Many regard The Milepost as the true bible of North Country travel. Part of this acclaim comes from the verification process that occurs each year. Field editors annually validate route information and update the details concerning things like accommodations, road conditions, potential side trips, hunting and fishing opportunities, ferry schedules and sightseeing venues. Along with exhaustive route information, this guide provides detailed guidance on how to cross the international borders with a minimum of trouble. Even if you can’t visit Alaska this year, the Milepost and its accompanying digital edition make it an excellent armchair companion for the virtual traveler.

A great feature of the Milepost is its base itineraries and activity suggestions. One example is an itinerary that details travel beginning with travel through Southeast Alaska on the ferry, looping through the Yukon to the west toward Anchorage and returning south via the Alaska and Cassiar Highways. Spanning more than 3,500 miles, this trip covers an amazing diversity of terrain, cultural landmarks, communities and sightseeing options. One suggested activity is to visit the many glaciers that can be accessed with a vehicle like Matanuska Glacier on the Glenn Highway and Worthington Glacier on the Richardson Highway or consider a day trip on a small cruise ship to Sawyer Glacier near Juneau and Columbia Glacier near Valdez.

Mile-by-Mile Highway Logs – The Milepost details both the east and west access routes to Alaska through Alberta and British Columbia respectively. Every major highway system found in the north is logged mile-by-mile to permit in depth trip planning. Supporting this effort, the guidebook describes the sightseeing, wildlife viewing, camping and accommodations that are available at points of interest along each highway. Some of the major routes are shown below and the Milepost describes an additional 35 roads and highways found in the north.

The Milepost by the Numbers – The Milepost 2013 (ISBN 978-1-8921543-0-9) is available for $29.95 ($34.95 Canadian) at most bookstores or online at the Morris Communications website and has been published since 1949. It is in an 8-1/2” by 11” paperback format and has 760 pages, 600 color photographs, 100 maps including a pullout planning guide map and latitude/longitude data for GPS users. Mile-by-mile logs detail 30 major routes, 60 potential side trips, 15,000 miles of highway and points of interest. The guide has a complete trip planning section that covers air travel, ferries, accommodations, bus lines, community event calendars, camping, radio use, cell phones, crossing the border, driving tips and much, much more.

Purchasers of the Milepost are given access to its digital version that offers all the content of the print edition. Additional features include embedded videos and slideshows of attractions, hotlinks to advertising and editorial content and the ability to search the guide. There are iPad and Android apps of the Milepost available as well.

In a press release dated March 14, 2013, publishers of the Milepost alerted purchasers of the guide that an error had been discovered in the pullout trip planning map that is included in the book. Red lines on some highways were inadvertently dropped from the maps. A new map has been printed and is being made available to travelers along the routes mentioned in the guide at visitor’s centers on the Parks, Seward and Richardson Highways or a new map can be requested at mpedit@themilepost.com.

Whether you plan to visit the North this year or can only dream about it, The Milepost should be your first resource for planning that trip.