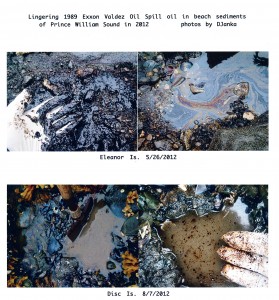 In 1989, the Exxon Valdez ran aground on Bligh Reef in Prince William Sound Alaska. Work has been underway in the years since the tragedy to implement a recovery plan for the Sound. It has been noted recently that a claim for $92 million made by the United States and the State of Alaska in 2006, under the terms of a reopener provision in the 1991 settlement with Exxon has never been collected. The reopener provisions allowed the government to come back to Exxon at a later date to seek compensation for damages that could not be determined at the time of the 1989 oil spill. Resolution of the Exxon Valdez restoration claim has been delayed significantly.

Research undertaken to support these claims has been left unfinished for several years, prompting concern from US District Judge H. Russel Holland. In an order issued by the Judge on July 1, 2013, Judge Holland states, “The court is dismayed that so few of the projects that the Governments had expected to be completed by now have been completed. The court urges that those who are assisting the Governments in their endeavors be required to complete their work by the revised completion dates.”

Rick Steiner, a well known oil industry critic and member of the Public Employees for Environmental Responsibility (PEER) noted in a press release that, “Amazingly, it’s been seven years since the governments demanded this payment from Exxon but they have yet to collect a dime. This travesty may be a foreshadowing of the official neglect we can expect after spills that will surely occur from drilling in the Arctic Outer Continental Shelf.”

Exxon Valdez crude oil still lingers in the beaches of Prince William Sound and much is yet known of the ultimate effects the spill will have on the Sound, even after 24 years. Oil remaining in the Sound has been degrading less than anticipated and continues to effect animals like Pacific herring and sea otters. The government is required to update its status report to Judge Holland in March of 2014. Hopefully progress has been made on collecting the claim against Exxon by that time.