Discovery of a Unique Snow Scorpionfly Species in Alaska 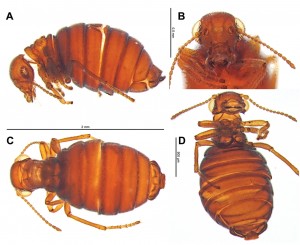 Researchers from the University of Alaska Fairbanks announced the discovery of a unique Snow Scorpionfly species in Alaska. The tiny insect is described as being cryptic, enigmatic, strange and so rare as to defy initial identification. A possible predecessor to fleas, the minute creature was found on the northern half of Prince of Wales Island in Southeast Alaska. Prince of Wales Island is located on the southern reach of the Alexander Archipelago that forms Southeast Alaska and is the fourth largest island found in the United States. The discovery was made during research efforts conducted to benefit the Tongass National Forest.

In the scheme of insect classification, this discovery would be keyed in this order: Arthropoda: Insecta: Mecoptera: Boreidae: Caurinus tlagu. The only other insect like it is found in Oregon and Washington. The insect order of Mecoptera includes the scorpionflies, hangingflies, and snow scorpionflies. Research by Grimaldi and Engel suggests insects in the Boreidae family are more closely related to fleas, than any lineage found in the Mecoptera order.

These flea-like insects feed on liverworts and moss that grow in the rainforest environment of the Prince of Wales Island, which is dominated by Sitka spruce and Western hemlock trees. They showed no preference for timber habitat, being trapped in old growth, thinned secondary growth, unthinned secondary growth and clear cut areas.

Researchers Derek Sikes and Jill Stockbridge were given the opportunity to name this unusual insect and used a Tlingit Alaska Native term Tlagu for stories of the long ago. These insects are thought to be part of a relic population that was more widespread during the Late Jurassic era, some 145 million years ago. Prince of Wales Island was buried by an ice sheet during past glaciation events and physical evidence points to the presence of ice-refuges that allowed the survival of isolated populations of plants and animals through the millennia.

Findings of this discovery are detailed in the report Description of Caurinus tlagu, new species, from Prince of Wales Island, Alaska that can be viewed online at the ZooKeys website.