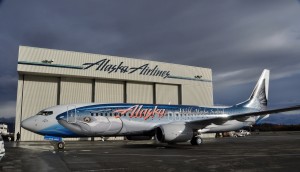 Working with the Alaska Seafood Marketing Institute (AMSI), Alaska Airlines launched an updated version of its fish themed Boeing 737-800, the “Salmon Thirty Salmon” to replace their original effort introduced in 2005. The iridescent, three-dimensional King salmon boasts 3,500 scales, each applied by Associated Painters of Oklahoma City. A crew of eight took nearly a month to complete the impressive project using 21 different colors of paint.

Weighing 91,000 pounds and having a length of 129 feet, this salmon would be a world class catch in any fishing record book. Flying at some 530 miles per hour, it will be difficult to catch. Ambitious fishermen can watch for this one to be flying across Alaska Airlines entire route network in the next year.

Alaska Airlines transported just about 24 million fresh seafood from the Great Land in 2011 to markets across North America. Having a fleet of aircraft and personnel dedicated to overnight shipping of fish products greatly improves the value received by Alaska fishermen for their product.

In a press release concerning Alaskan’s flying fish, Alaska Airlines Vice President Marilyn Romano noted, “Today, we are proud to introduce the largest flying fish to all of Alaska and the world. Not only will this special plane spotlight the best, most sustainable seafood harvest in the world, it will also remind us of the important role the seafood industry has on the Alaska economy. On behalf of the 1,700 Alaska Airlines employees working in the state, we are also proud to safely fly the thousands of men and women who work in the seafood industry throughout the Last Frontier.”

Though it is based in Seattle, Washington, residents of Alaska consider Alaska Airlines to be an integrally important part of the state. Half of the total seafood catch in the United States comes from Alaska and the partnership of Alaska Airlines and AMSI reflects the airline’s role with the state.

Alaska Airlines has posted a video of the painting process that can be viewed at: Painting the Salmon Thirty Salmon